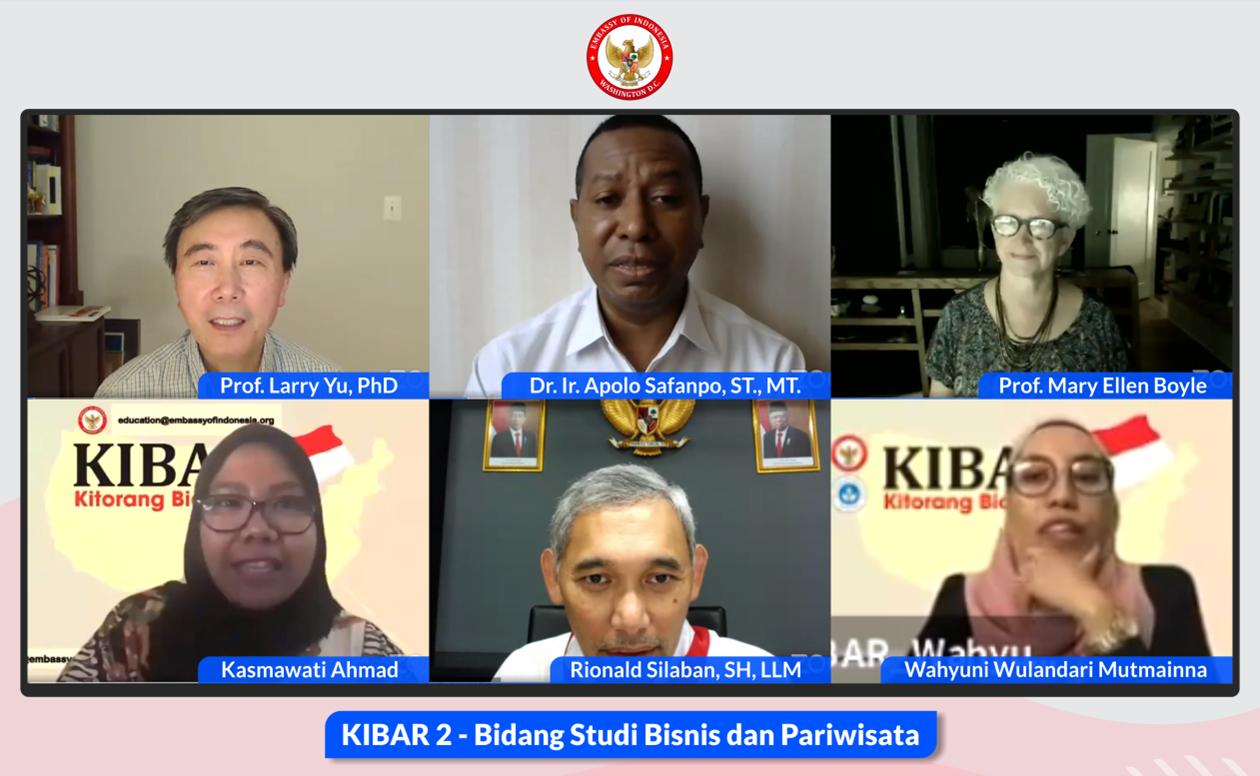 Washington, DC., (09/18/2020). KIBAR (Kitorang Bicara) or “We talk” is a serial-webinar held by the Indonesian Embassy in Washington D.C., USA through the Attaché for Education and Culture. The recorded live event of KIBAR Seri-2 can be accessed in the following link http://bit.ly/fb-watch-kibar2.

The 2nd series of KIBAR webinar chaired by Prof. Popy Rufaidah, the Education and Cultural Attaché, and featured (theme: Business and Tourism) three main speakers. The first speaker is Kasmawati Ahmad, a student of Clark University, Broklyn – New York. On this occasion, Ms. Ahmad introduced Basudara, an application that allows the people of a village to communicate about their needs. The application is inspired by Nextdoor, which was already popular in the United States. Ms. Ahmad then developed Basudara for the people of eastern Indonesia. Basudara allows its users in certain community to discuss capital loans, education savings, buying and selling between neighbors and pawnshops without having to go back and forth to other areas because of the long distances in eastern Indonesia.

The second speaker was Dr. Ir. Apollo Safanpo, S.T., M.T., the Chancellor of the University of Cendrawasih. In his presentation, Dr. Apollo highlighted the low percentage of Papuan children who continue their education to higher education level. According to Dr. Apolo, this is due to five obstacles, including 1) the number of universities and the limited capacity of universities in the eastern region; 2) the quantity and quality of educational infrastructure which need to be improved; 3) the quantity and quality of teaching staff that need to be improved; 4) language requirements constraints (TOEFL, IELTS, etc.); and 5) infrastructure in the form of an inadequate electricity.

Meanwhile, the third speaker, Wahyuni ​​Wulandati Mutmaina, a Master student of Tourism Administration, The George Washington University, delivered her presentation entitled “How Education as a Catalyst to Improve the Tourism Business in Eastern Indonesia”. Ms. Wahyuni ​​revealed that the tourism potential in eastern Indonesia, especially in North Maluku Province, is very high. However, these tourism potentials have not been properly promoted due to challenges in the human resource (HR) sector. Based on this, she recommended the government to improve a number of sectors including 1) education, 2) transportation, 3) infrastructure, and 4) planning and regulations so that the tourism sector in North Maluku could revive.