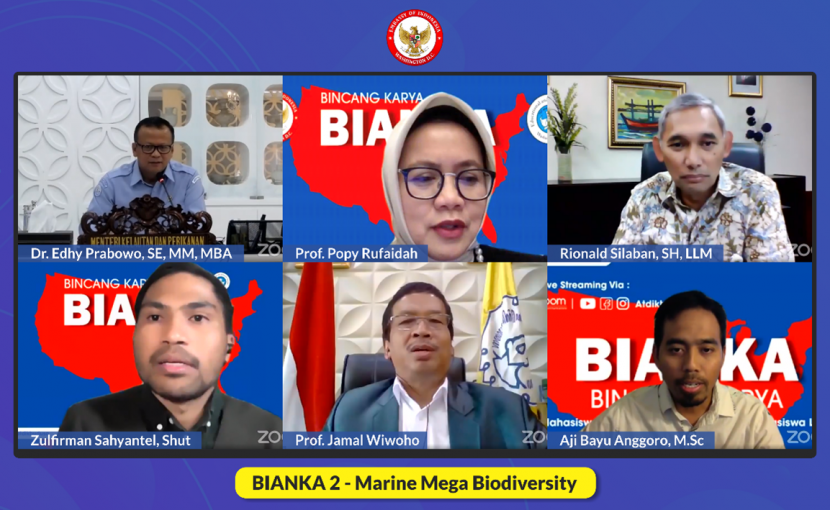 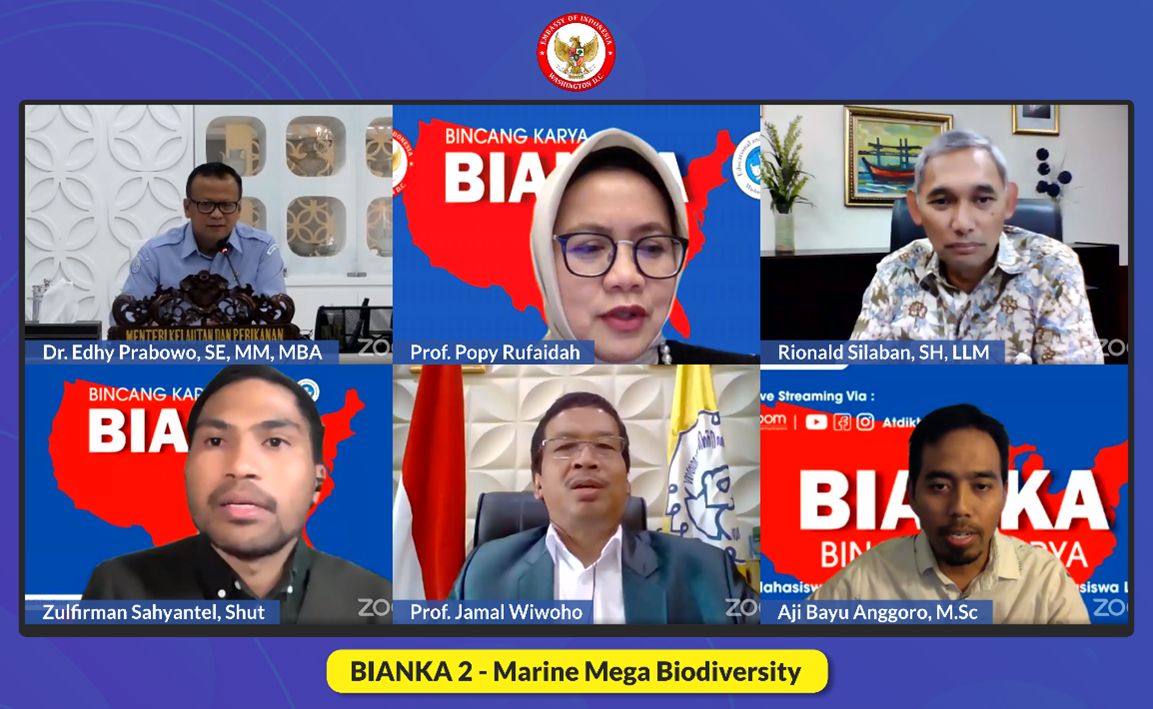 Washington, DC. (07/14/2020). BIANKA or Bincang Karya is a serial-webinar held by the Indonesian Embassy in Washington D.C., USA through the Attaché for Education and Culture. The 2nd series of BIANKA carries the theme “Marine Biodiversity (Marine-Mega BioDiversity)”.

The webinar chaired by Prof. Popy Rufaidah, the Education and Cultural Attaché, began by inviting Dr. Edhy Prabowo, SE., MM., MBA as Minister of Maritime Affairs and Fisheries of the Republic of Indonesia. Dr. Prabowo emphasized that Indonesia has a very rich biodiversity, which is why it is called mega-biodiversity. The government is very aware of this biological wealth, so it seeks to protect it from a number of threats, including over-exploitation of resources, water pollution from various industrial and household sectors, and even climate change. To prevent further damage, there are at least five pillars that are used as the basis for reference in maritime development. These five pillars are adjusted to the goals of sustainable development goals which are embodied in a number of efforts, one of which is the formulation of regulations for the protection of fish species.

The recorded live event of BIANKA Seri-2 can be accessed in the following link http://bit.ly/fb-watch-bianka2

There were also two other speakers who shared their ideas on this topic. The first presenter was Zulfirman Rahyantel who is a master student from Human Dimensions of Natural Resources, Science University of Missouri, Columbia.  Mr. Rahyantel explained the importance of balancing three aspects, namely social, ecological and economic in the management of Marine Protected Areas (MPA) in Indonesia. The MPA development should also be based on context and local wisdom (contextualization) so that the results are maximized as implemented in Ay Island, Maluku.

The second presenter was Aji Wahyu Anggoro, PhD candidate from the Department of Ecology, California University, Washington D.C. In his presentation, Mr. Anggoro introduced standardized methods to determine the biodiversity of coral reef ecosystems. Through a tool called the Autonomous Reef Monitoring Structure (ARMS), Mr. Anggoro and his team were able to map more than 250 thousand taxa from 100 points in several countries as a form of biodiversity in the sea. However, this tool needs to be maximized by adding to the species database so that more and more taxa in the sea can be identified by the ARMS tool.