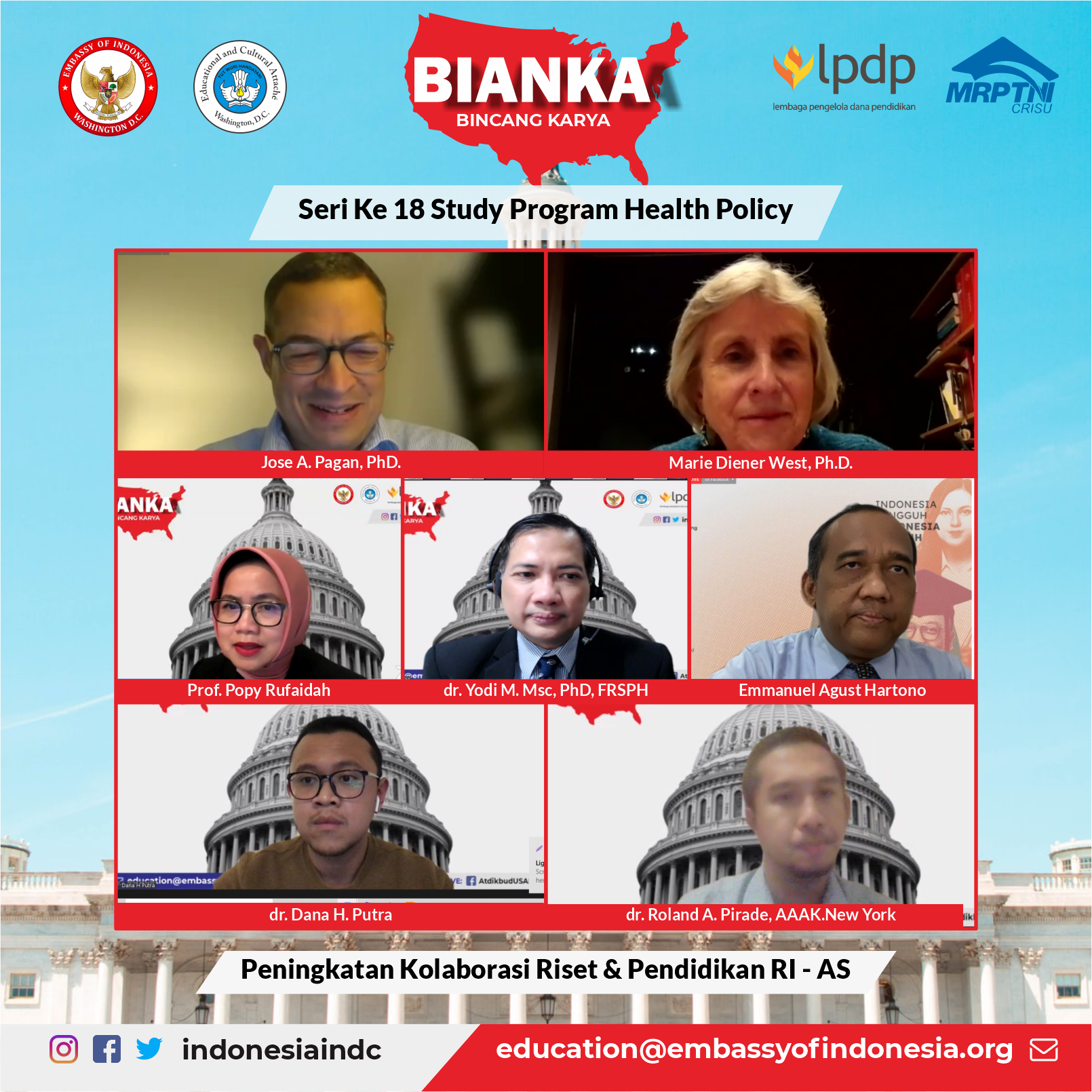 Indonesian Embassy in Washington, D.C. Support the Government’s Efforts in Increasing Human Resources in the Public Health Sector to Improve the Quality of National Health

The Indonesian government strives to improve the health quality in Indonesia by continuing to increase the budget for the health sector.

This statement was made by Emmanuel Agust Hartono, Director of Finance and General Affairs, Indonesian Endowment Funds for Education (LPDP), Ministry of Finance, while attending the Bincang Karya (Bianka) Webinar on Tuesday (11/10).

Agust also stated that the government was aware of the importance of investing in the health sector and one form of this investment was through education which aimed to produce qualified and excellent health professionals who were ready to serve the entire community.

This move welcomed by the Embassy of the Republic of Indonesia in Washington, D.C. through the Educational and Cultural Attaché (Atdikbud) by conducting the 17th Bianka Webinar series in collaboration with the LPDP, Council of Rector of Indonesia State Universities (MRPTNI), and the Ministry of Education, Culture, Research, and Technology (Kemendikbudristek).

A number of figures were present and actively involved in the discussion led by Yodi Mahendradhata, Deputy Dean of the Faculty of Medicine, Public Health, and Nursing, Gadjahmada University. The figures who attended were two representatives of leading campuses in the United States, the Director of Finance and General Affairs of the LPDP, Atdikbud RI in Washington, D.C, and two Indonesian students who are continuing their studies in the United States.

Atdikbud Popy Rufaidah expressed her appreciation to all parties who participated in this webinar. She hoped that this forum could increase the interest of students or professionals to continue their studies and establish research collaborations with universities in America.

“We are very honored to have two speakers from leading universities, where we want to increase the number of Indonesians to study in the US with Indonesian government scholarships. We are very interested in qualifying for the School of Global Public Health, New York University, and also to the Bloomberg School of Public Health, Johns Hopkins University,” said Atdikbud Popy.

Jose said that his campus is a campus with diversity. It is proven that there are approximately 39 languages ​​that reflect the origin of students.

“When you think of New York City, you think of a place where people from all over the world are, you get that same feeling when you’re at NYU or in one of the programs there. We have 39 different languages ​​spoken by students on campus,” said Jose when he started his presentation.

Meanwhile, Marie Diener West, also attended this webinar. Marie is Chair of MPH Program, Bloomberg School of Public Health, Johns Hopkins University. Like the previous speaker, Marie also gave a brief overview of the curriculum and opportunities for collaborative research that might be possible.

One of the highlights of this campus is that Johns Hopkins University is the first campus to have a Mental Health department. In addition, there is also a dual degree program that students can participate in.

Because of the competitive selection, Marie, who is a Professor of Biostatistics, suggested the prospective applicants strengthen their skills and reminded them of the importance of letters of recommendation and personal statements that reflect their reasons for applying to the department.

“We really want to see the skills the students bring, and want to know how far they will go. That’s why it’s very important to have a letter of recommendation that supports the student, as well as a personal statement that shows that they know why they want to be in a particular program/degree because we really want to look at it holistically to ensure that students will succeed,” explained Marie.

The event continued by inviting Roland A. Pirade, one of the students with a presentation entitled “Healthcare Equity in Diverse Population and The Covid-19 Pandemic”. Currently, Roland is completing his Masters studies at NYU.

The focus of the discussion was on the health sector policies implemented by America and Indonesia during the Covid-19 pandemic. His experience while participating in an internship at a hospital in America made him understand why this developed country is willing to spend trillions of dollars on its public health facilities.

Apparently, this is because America wants health facilities to be enjoyed by all parties without exception, including illegal immigrants or undocumented immigrants. They uphold the principle of equity in their health services.

Roland added, “Equity here means that people who are, for example, undocumented or Illegal immigrants can access the health care without having to be afraid or transgender people who have, for example, macho bodies, women’s bodies. This (country) encourages them to access health. So, this is also one of the important points of the policy system,” he explained.

In handling Covid-19 itself, Roland said, the United States issued policies such as screening at several airports, limiting public activities, quarantine, establishing a national emergency, and the vaccination that are continuously being boosted.

Furthermore, Roland said there are at least four things that Indonesia can learn from the US’ policy, namely, strengthening health services, especially at the first level, increasing promotion and prevention, improving regulations, access and financing systems as well as preparedness in dealing with disasters or epidemics in the future.

On the other hand, Dana H. Satya, a Master candidate of Public Health, Johns Hopkins University, shared a bit of his experience on why he took MPH studies. According to him, the wide job opportunities at the local to international level as well as the increasing need for experts in the field of public health were the reasons.

While choosing the United States, he said, “The first is that the curriculum of study in Public Health in America is very broad. There are so many majors and concentrations that can be taken. Then, also about research, Universities in the United States are ranked highest because of the impact of this research in the world, starting from vaccines, about diseases and others, as well as the many resources from universities that support our learning activities,” he said.

Dana acknowledged that the Covid-19 pandemic had a very great impact on various aspects such as the economy, education, and health services itself. But he was happy because vaccination coverage in Indonesia as per November 9th had reached 60% for the first dose and 38% for the second dose.

“This is quite an encouraging achievement because we are one of the 5 main countries with the highest number of vaccines in the world,” said Dana.

Dana also said that there were at least four scenarios predicted by WHO which were termed into four phrases, namely: A Little Happiness, I Love You, I Hate You, Heartbreak Hotel, and Here Comes Trouble.

Bianka webinar series was also held as a support for the Merdeka Belajar-Kampus Merdeka program of the Ministry of Education, Culture, Research and Technology (Kemendikbudristek) which aims to prepare creative and adaptive human resources.