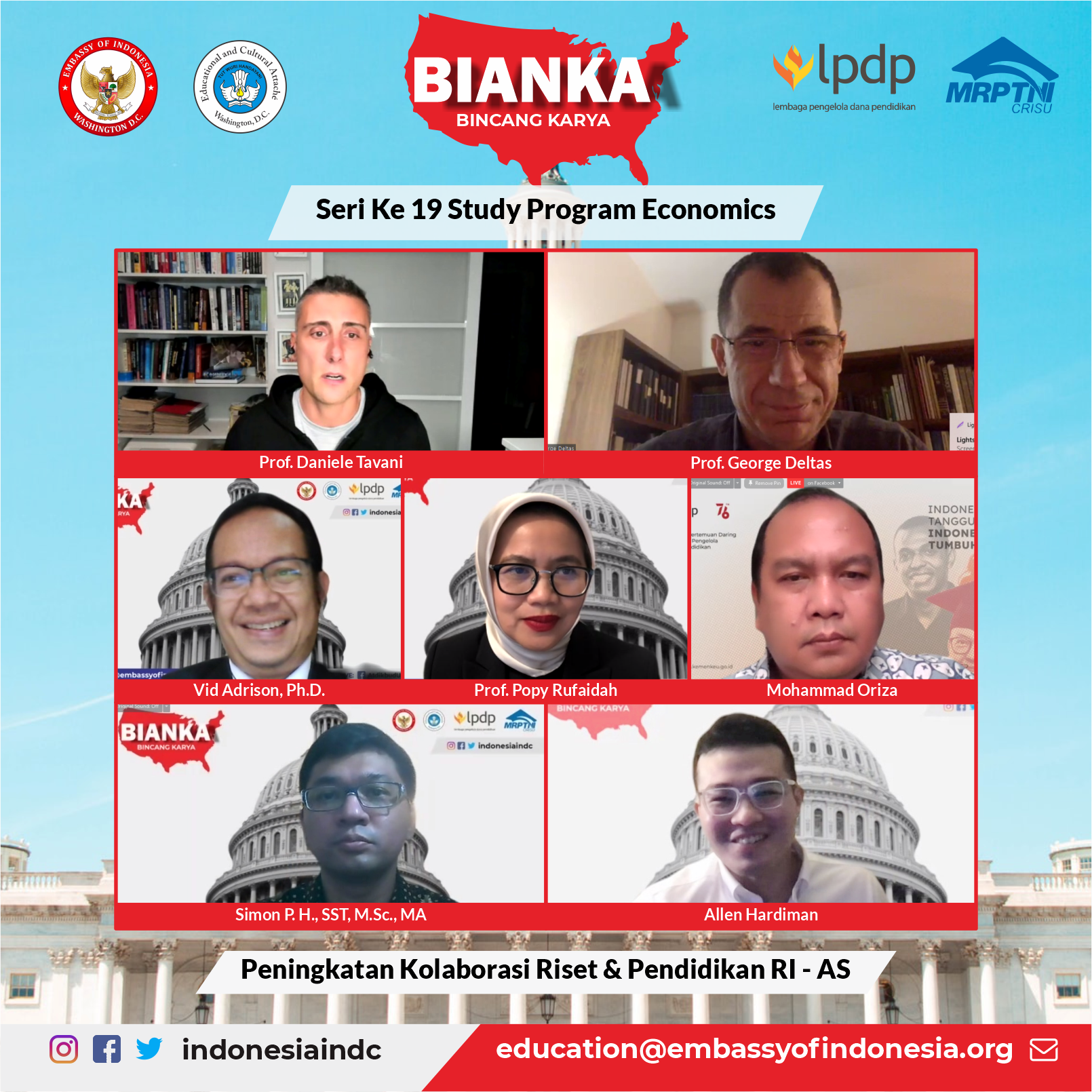 Two Indonesian students who are currently completing their studies in the field of economics in the United States had the opportunity to present their latest research at the 19th Bianka (Bincang Karya) or Creation Talk Webinar (11/16/2021).

Simon P.H., one of the presenters, had the opportunity to share some insights regarding the environmental economics which is a branch of Macroeconomics. Specifically, he raised a discussion on the use of clean energy. According to him, many engineers, physicists, biologists or statisticians are interested in using economics to analyze or quantify other sciences outside economics. So, this branch of knowledge is very useful.

Furthermore, Simon, who is a Ph.D. candidate from the College of Liberal Arts, Economic Department, Colorado State University, presented the journey of the United States and Indonesia in the effort to create clean energy.

In the US, Simon said, President Biden has a program called the Green New Deal (Build, back, Better). There are several focuses in this program, namely carbon-free by 2035, creating jobs to reduce energy costs, reducing carbon dioxide emissions in the forestry and agricultural sectors, as well as technological innovations to achieve this carbon-emission free.

Meanwhile in Indonesia, he added, there were several frameworks set by the government for emission-free efforts, starting with the issuance of a presidential decree on renewable energy. This step was followed by the use of electric stoves, the existence of smart grids and smart meters, stopping imports of LPG, granting gas access, electric cars and so on.

Currently, Simon is completing his research on clean energy in which the research considers the impact of government subsidies related to investment in solar power generation.

In his research, he uses the methodology of how to model energy demand, how fossil fuels switch to renewable energy using a non-refundable investment method.

“The policy implication that I hope here is how an increase in government subsidies can reduce the price of investment in renewable energy,” explained the employee of the Director General of Taxes at the Ministry of Finance.

On the other hand, Allen Hardiman, a scholarship grantee from the University of Illinois at Urbana-Champaign, shared a brief overview of his research that was carried out with two other students and their supervisor.

This research investigated how the trend of income in the labor market was between fathers and mothers when mothers are pregnant and have children. Allen said that this idea came about because in America itself there was still an income inequality between mothers who are married and have children and their father’s income. In fact, even when they have children, mothers spend more than before.

He said, “So we found that there was a big job penalty for mothers. The largest was in European countries which were included in the catch-up countries. This penalty was smaller than generous compensation. So, maternity leave provided a large salary compensation but this penalty was larger for long maternity leave. And as I said earlier, there was no effect on working hours, conditional working. And there was no decrease in the mother’s income because it was replaced with income from benefits,” he concluded.

Popy Rufaidah, the Cultural and Educational Attaché in Washington, D.C. realized that Indonesia has many excellent and promising young generations. For this reason, she committed to encouraging them to continue their studies abroad, especially to the United States.

“This seminar is one of the media to increase the preference of Indonesian students to study in the United States with scholarships, especially in the economic field, and it is open to all people,” said Popy when opening the event on Tuesday night.

This commitment was welcomed by LPDP by continuing to provide scholarships for the younger generation of Indonesia. Especially in the economic field.

“During the pandemic, we remain committed to providing a scholarship program in 2021. With all the hard work of the scholarship team, we are simplifying the scholarship selection process by conducting online selection of academic substances and interviews,” explained Muhammad Oriza, Investment Director of LPDP, Ministry of Finance.

In addition, LPDP has also implemented extraordinary policies in response to the pandemic, such as delaying departure for students to countries with a lockdown policy as well as providing opportunities to extend the study period and period of stay for those who are abroad.

Two representatives from leading universities in America were also invited. George Deltas, representative from the University of Illinois-Urbana Champaign and Daniel Tavani from Colorado State University were present to explain the programs offered and various research collaborations that could be established.

In the doctoral program, there is a Ph.D. track in the Master’s program where qualified students can undergo two years of study in a master’s program and continue directly to the second year of a Ph.D.

Deltas also said that the doctoral program on campus is very strong with empirical microeconomics, labor and public development organizations, in its capacity building, econometrics and macroeconomics.

The University of Illinois also provides two types of scholarships for its students, namely scholarships for doctoral students for the first year and Summer Rewards for those who achieve certain academic qualifications.

“We give out about 12 to 14, Summer Rewards, but these are for students who have certain achievements, they are very promising. And it’s competitive for everyone in the Ph. D., not just the first year, but everyone on the PhD,” Deltas explained.

Meanwhile, Daniel Tavani, Director of Graduate Studies, Department of Economics, Colorado State University, explained a lot about the programs that the university offered and the research topics that he and his colleagues did. Not only that, he also explained some research done by Indonesian students. He also informed about the scholarships that could be obtained.

“Every year, we have about seven funded positions. And this is related to teaching assistants. So, funded students basically become teaching assistants in compulsory courses for the first three years and then become instructors for their country, usually, two more years, sometimes three more years,” said Tavani.

Regarding collaboration, he said that his campus was open to research collaborations on various topics in his department which included six fields of environmental regional development. Especially in the fields of economic development, natural resources, tax policy, and education in developing countries.

Regarding research collaboration, both agreed that there was no centralized process. Anyone who wants to collaborate on research can directly contact professors who have the same field of expertise or can go through their respective faculties and the next process will be continued by the department.

For information, the recording of the Bianka Series-19 live broadcast can be accessed on the official Atdikbud USA Facebook page with the link https://bit.ly/fb-watch-bianka19