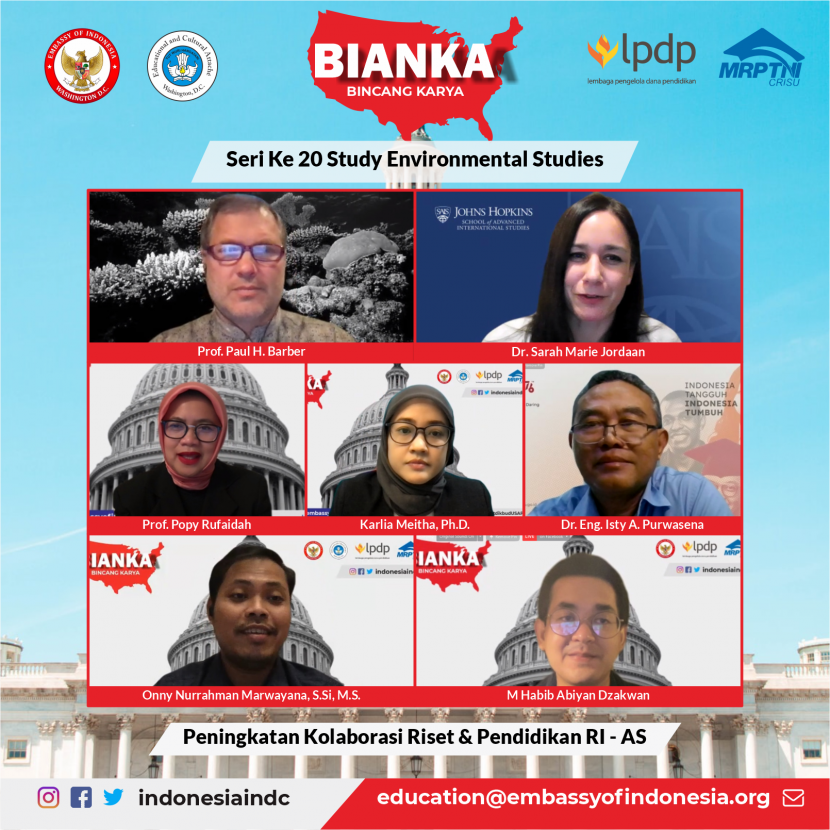 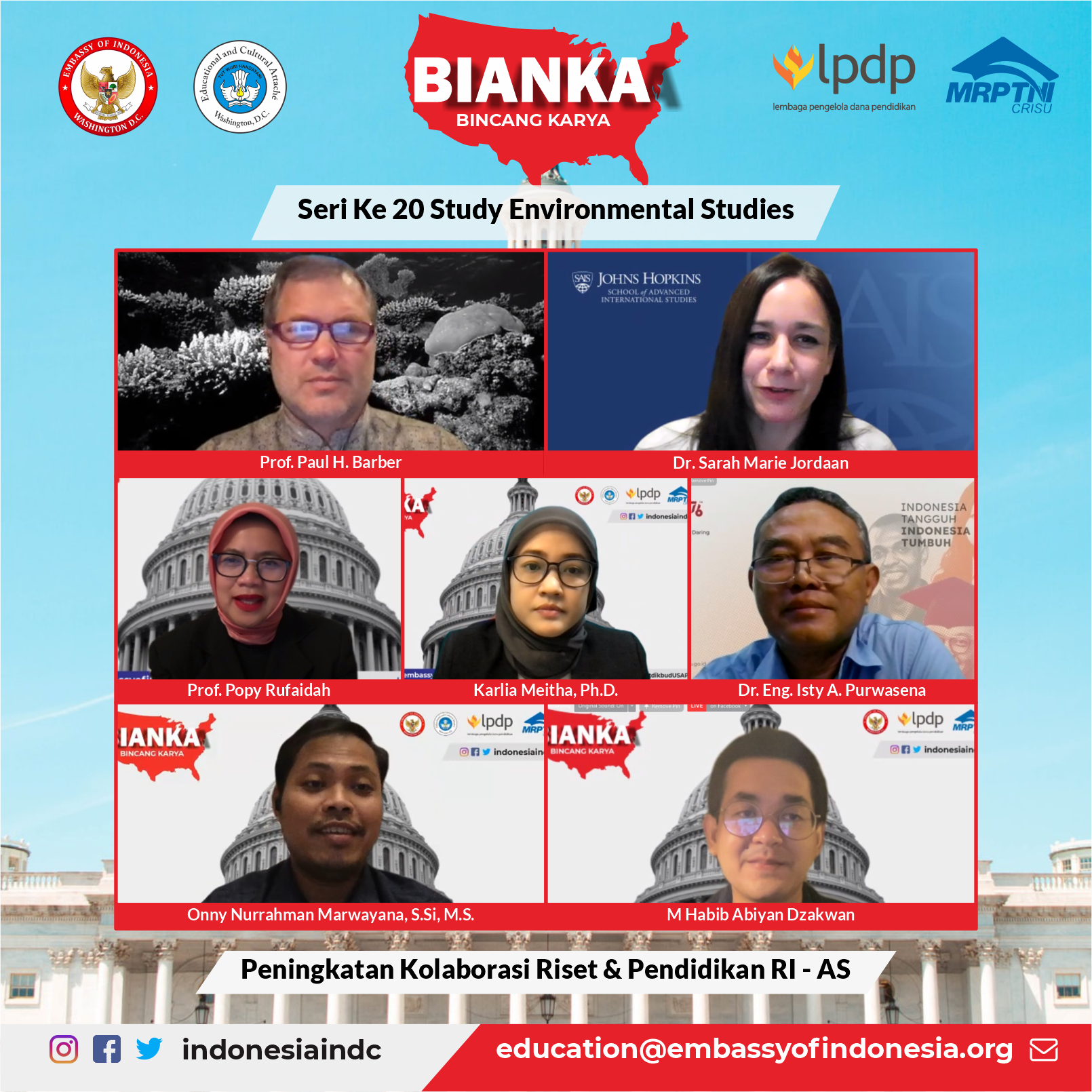 Responding to Environmental Issues, Indonesian Embassy in Washington, D.C. Encourage Human Resources for Environmental Science Studies to Study in the US

Washington, D.C. (11/24/2021). Environmental issues are an issue that is being intensively discussed at this time. Climate change, global warming, rising sea levels and so on are the concerns of countries around the world. For this reason, the Indonesian government continues to encourage the improvement of the quality of human resources in the environmental sector through LPDP scholarships.

Wisnu Sardjono Soenarso, Director of Research and Rehabilitation Facilities, Indonesian Endowment Fund for Education (LPDP), Ministry of Finance of the Republic of Indonesia said, LPDP continued to support collaboration with universities abroad, both in education and research collaborations to improve Indonesian human resources.

“One of these efforts is through RISPRO, Productive and Innovative Research Funding, for international research collaborations. At least, there were three that have been implemented, namely with the University of Melbourne, UK universities, and research partners from the Massachusetts Institute of Technology (USA) in collaboration with IPB, UI, and ITB,” said Wisnu while attending the Bianka webinar or Bincang Karya on Tuesday.

This program was warmly welcomed by the Educational and Cultural Attaché (Atdikbud) of the Republic of Indonesia in Washington, D.C., Popy Rufaidah, who has consistently supported the Merdeka Belajar – Kampus Merdeka program of the Ministry of Education, Culture, Research, and Technology (Kemristekdikti) which aimed at creating a future young generation that is superior and relevant to the needs of the times.

“I hope this webinar can increase the interest of the Indonesian generation in environmental science to continue their studies in the United States, especially through LPDP scholarships. In addition, we also hope that research collaboration will be created with this activity,” Popy hoped when opening the event which was attended by various groups ranging from students, academics, to professionals.

This webinar with the theme of environmental science which was hosted by Karlia Meitha, Head of the Master’s Program in Biotechnology, School of Life Sciences and Technology, Bandung Institute of Technology (ITB), invited two campus representatives in the US. They were Paul H. Barber from the Department of Ecology and Evolutionary Biology, University of California, Los Angeles (UCLA), and Sarah Marie Jordaan who is Assistant Professor of Development, Climate, and Sustainability from the School of Advanced International Studies, Johns Hopkins University.

Paul H. Barber gave an overview of the study programs that the campus offers, especially in the field of environmental science studies, one of the programs that attracts a lot of interest from international students. Furthermore, he also explained various facilities specifically for international students, one of which was the Deshew Center for International Students and Scholars which provided assistance related to academic matters, logistics, health, and so on.

It was also stated that UCLA was one of the public universities in America which was quite affordable in terms of tuition fees, which was around $18,000 per year. Paul said that the university was very competitive. However, he emphasized that one of the keys to success in enrolling at his campus was to establish contact with the faculty before registering.

“I think one of the biggest challenges for Indonesian students in my department, especially Ecology and Evolutionary Biology, is that students need to develop some kind of contact with the faculty first. It is very important for prospective students to build relationships with prospective supervisors,” he said.

Sarah also said that her campus really supported the integration of theory and practice so that each lecture session could achieve learning objectives. In addition, of course, Sarah introduced the Development, Climate, and Sustainability (DCS) program in the campus which focuses on issues of growth, poverty reduction, energy, environment, and climate change.

She also revealed that there were many opportunities for students to be involved in research and publications. Regarding research collaboration, both of them agreed that the opportunity was wide open.

“I would love to speak more with anyone who is interested in establishing a wider connection, we also have a new energy center run by the Faculty of Engineering. So, we have a lot of new grants and initiatives out there if you’re interested in energy and the environment, in terms of biodiversity,” said Sarah.

Specifically, Popy hoped that universities in Indonesia could cooperate with the two universities. “I am interested in the hybrid learning that Johns Hopkins University offers in the international relations development program considering that climate change is one of the important issues and is being discussed a lot at the moment both in the global arena and the local area,” said Popy.

Onny N. Maryana, one of the LPDP awardees, had the opportunity to present his research on Environmental DNA (eDNA), a topic that is being discussed a lot at the moment. To do this research, he said, he used DNA metabarcoding. The basic concept of this approach was that the researcher collected all samples from an environment consisting of various organisms.

“We extract the genetic material, we amplify it, then we sequence it to get a nitrogen base, then we visualize it so we can get a picture of its biodiversity,” he added.

According to Onny, a doctoral candidate from UCLA, eDNA could be used to determine biodiversity in the ocean by only collecting 1 liter of water. In fact, this method can be used to see ancient ecosystems.

The reason Onny took this topic was because Indonesia is famous for its marine biodiversity, while the current methods are very limited. So, he felt that there was a need for a more relevant method to be able to explore this abundant wealth.

Regarding his journey to finally getting a scholarship, the man who had a master’s degree at the University of California said that he had already established a network with his supervisor.

“It’s very important to build good communication with prospective supervisors at the university you are going to go,” he said.

On the other hand, Mohammad Habib Abiyan D., a doctoral candidate who is currently completing his studies at General International Relations, Johns Hopkins University, presented his research related to environmental issues, namely sea level rise. According to Habib, Indonesia was one of the most vulnerable countries related to sea level rise.

“First, geographically, Indonesia is an archipelagic country with the longest coastline. Second, from a socio-economic perspective, 60% of Indonesia’s population lives in coastal areas. Third, in terms of security politics, Indonesia is very vulnerable because 12 of the 14 naval bases are projected to be affected. Finally, in terms of ecosystems, our coral diversity must be protected because it is one of the most vulnerable,” explained Habib.

Unfortunately, Habib added, Indonesia’s attention to this issue was still low. In his research, Habib examined why this could happen. There were at least three reasons for this, namely: Indonesia was responding to the issue of climate change in a very sectoral way; second, differences in priorities, in which it was difficult for developing countries to project adaptation efforts to long-term problems; third, the limited interest or knowledge of the general public regarding sea level rise.

Habib, who is mostly involved in climate change issues as a disaster researcher at the Center for Strategic and International Studies (CSIS) Indonesia, concluded that the issue of rising sea levels could exacerbate the risk of a tsunami. He also said that this required political commitment not only at the central level but also at the regional level and a clear division of tasks. Finally, this agenda needed to be moved from mere dialogue to practical cooperation between countries.

Regarding university selection, Habib revealed several reasons. “As a researcher, Johns Hopkins offered me exactly what I needed. They emphasize the importance of policy. They also provide opportunities for further study with practitioners, one of which is Prof. Jordan,” explained Habib. In addition, the university also offers to increase the quantitative skills he needs.

In addition to the importance of establishing communication with professors at the target university, Habib said, building connections with important figures in Indonesia is also considered important. He told how he got a recommendation from the former Indonesian Ambassador to the United Nations, Prof. Dr. Hashim Djalal.

It is planned that this series of Bianka webinars will continue until mid-December.

For information, the recording of the Bianka Series-20 live broadcast can be accessed on the official Atdikbud USA Facebook page with the link https://bit.ly/fb-watch-bianka20.