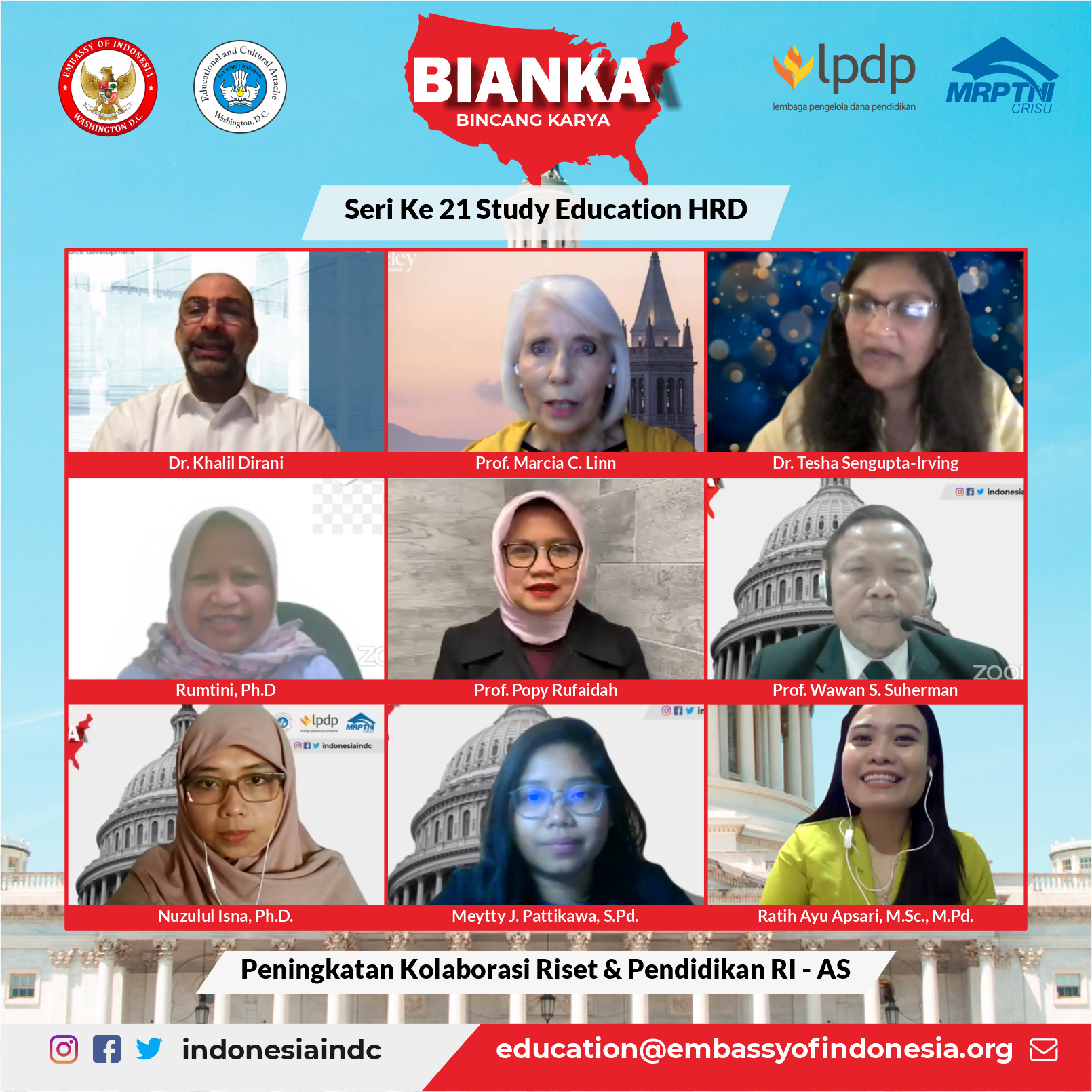 Indonesian Embassy in Washington, D.C. Supports Students and Professionals in the Field of Human Resource Development to Study in the United States

Washington, D.C. – Embassy of the Republic of Indonesia (KBRI) in Washington, D.C. held a series of webinars called Bincang Karya (Bianka) or Creation Talk with the theme Educational HR Development on Tuesday (11/30/2021).

This webinar was made possible because of the harmonious cooperation between the Indonesian Embassy in Washington, D.C. through the Educational and Cultural Attaché (Atdikbud) of the Republic of Indonesia, the Indonesian Endowment Fund for Education (LPDP), the Ministry of Education, Culture, Research, and Technology (Kemdikbudristek), and the Council of Rector of Indonesia State Universities (MRPTNI).

Atdikbud Popy Rufaidah expressed her appreciation to those who have consistently supported the continuity of this webinar event, as well as expressed her support for the Merdeka Belajar – Kampus Merdeka program of Kemristekdikti.

Popy really hoped that this webinar could increase the interest of students or professionals in the field of education to continue their studies in the United States or establish research collaborations with the University of California, Berkeley and Texas A&M University.

The webinar led by Maman S. Suherman, Dean of the Faculty of Sports Science, Yogyakarta State University, was also attended by Rumtini, Head of the LPDP Scholarship Selection and Recruitment Division, Ministry of Finance of the Republic of Indonesia.

Rumtini said, LPDP consistently supported the government in improving the quality of the nation’s young generation through the provision of LPDP scholarships, including for the area of ​​Human Resource Development in education.

“There are three scholarship pathways in 2021, namely affirmation scholarship which include scholarship for people with disabilities, disadvantaged regions, those from underprivileged families, and students. While in the targeted group there is scholarship for civil servants, Indonesian National Armed Forces (TNI) officer/ Police officer, and entrepreneurship scholarship. In this group there is a new program, namely scholarships for cadres of Islamic scholars. The third general category consists of general scholarship, World’s Top Universities (PTUD), and co-funding scholarships,” explained Rumtini.

The first speaker was Khalil Dirani, Associate Professor & Education Human Research Development (EHRD) Program Chair, from Texas A&M University. In general, Khalil explained about the EHRD program at Texas A&M University. The elected President of the Academy of HRD also explained further about the career opportunities that could be pursued by graduates of this program.

Regarding student admissions, Khalil said that the university had removed the GRE requirement. “GRE is not needed for Masters and PhD programs because in our opinion there is no correlation with student performance,” explained Khalil.

Meanwhile, there were two representatives from the University of California (UC) Berkeley who were present that night. One of them was Tesha Sengupta-Irving, Associate Professor of Learning Sciences & STEM Education. On this occasion, Tesha gave an overview of the post-graduate program in education that the university offered. One of the highlights was the Joint Doc program for the doctoral program, which is a collaborative program between UC Berkeley and San Francisco State University. These two universities produce professors in the field of education, especially in California. Tesha also gave a little detail about the amount of fees that need to be paid per year for students.

Slightly different from Tesha, Marcia C. Linn specifically talked about research conducted by the UC Berkeley School of Education. She said that there are at least four existing research themes, such as Creating Deeper Equality, Expanding Who Learns, Innovating Designs for What to Learn, and Defining and Preparing Future Leaders and Educators.

“I’m excited to share with you my insights into what we do and, at the end, introduce some of the teachers who do this research at Berkeley. I highly encourage you to collaborate with us, we are eager to build additional international insight into education and your contribution will be invaluable,” said Linn.

In addition to the three campus representatives above, three students who received LPDP scholarships were also present. One of them was Nuzulul Isna, an LPDP alumni and a doctoral graduate from Texas A&M University in the field of Educational HR Development.

On this occasion, Isna shared her dissertation entitled ‘A Study of Teacher Development Program on Transfer of Learning in Indonesia.’ Her research aimed at evaluating teacher professional development programs through transfer of learning measures in Aceh.

One of her research focuses was investigating the relationship between self-efficacy, training design, supervisor support, and peer support on the transfer of knowledge or training transfer for teachers in their work environment.

There were at least three research results, namely: all of these factors had a significant and positive impact on the knowledge transfer process, except for supervisor support, teacher motivation to transfer knowledge was a significant factor to mediate the four factors above on their ability or desire to transfer knowledge in their teaching activities. From the results of the interaction analysis, it was known that the training activities participated in by the teachers had a positive impact on increasing their self-efficacy and on the support of their superiors.

Meanwhile, Meyyty J. Pattikawa who is a master’s program student from Texas A&M University shared the reasons why she chose to take the EHRD program at the university. The reasons for this include, among others, program integration, the university being a research-based university, the existence of scattered agent networks, and first-generation support.

In addition, she also slightly shared her research interests. The first was the field of career development for students. “Indonesian Statistics data on May 31, 2021 showed that in the last 5 years from 2017 – 2021 there has been an increase in the unemployment rate with higher education degrees,” said Meyyty. For this reason, this woman who works as a tour guide proposed a plan to overcome this, such as establishing a career center at a university that equips students with the necessary skills so that they are ready to enter the world of work, such as training in making application letters.

Metty was also interested in training and career development for adults without a high school diploma. Through effective vocational training, she hoped that those without a diploma can be equipped with skills so that they could, at a minimum, manage local natural resources in their area. Of course, this training needed to be accompanied by monitoring and assistance for the purpose of their work as well as regulations that empower local human resources like them, she said.

On the other hand, Ratih Ayu Apsari, a doctoral student at the University of California Berkeley, shared some of her reflections after attending lectures for one semester. One of them was that UC Berkeley made her more confident that what she has learned so far in her social environment was true knowledge. In addition, she also felt very appreciated.

“Sometimes I can’t define myself well. Sometimes I don’t know that my interest is actually an interesting and new study in the US. For example, here is Ethnomathematics, Cultural Funds of Knowledge and cross-cultural Epistemic diversity which I didn’t know at first. So, I pursued it. I thought it is just an ordinary thing, but when it is translated into a scientific term and the direction of research development turns out to be like this,” said Ratih.uttered.

As for her research proposal, Ratih admitted that in the future, she would research dance and mathematics, especially classical Balinese dance. but she admitted that her proposal would definitely change a lot due to the new knowledge she has continued to gain since she first became a UC Berkeley student.

For information, the recording of the Bianka Series-21 live broadcast can be accessed on the official Atdikbud USA Facebook page with the link https://bit.ly/fb-watch-bianka21