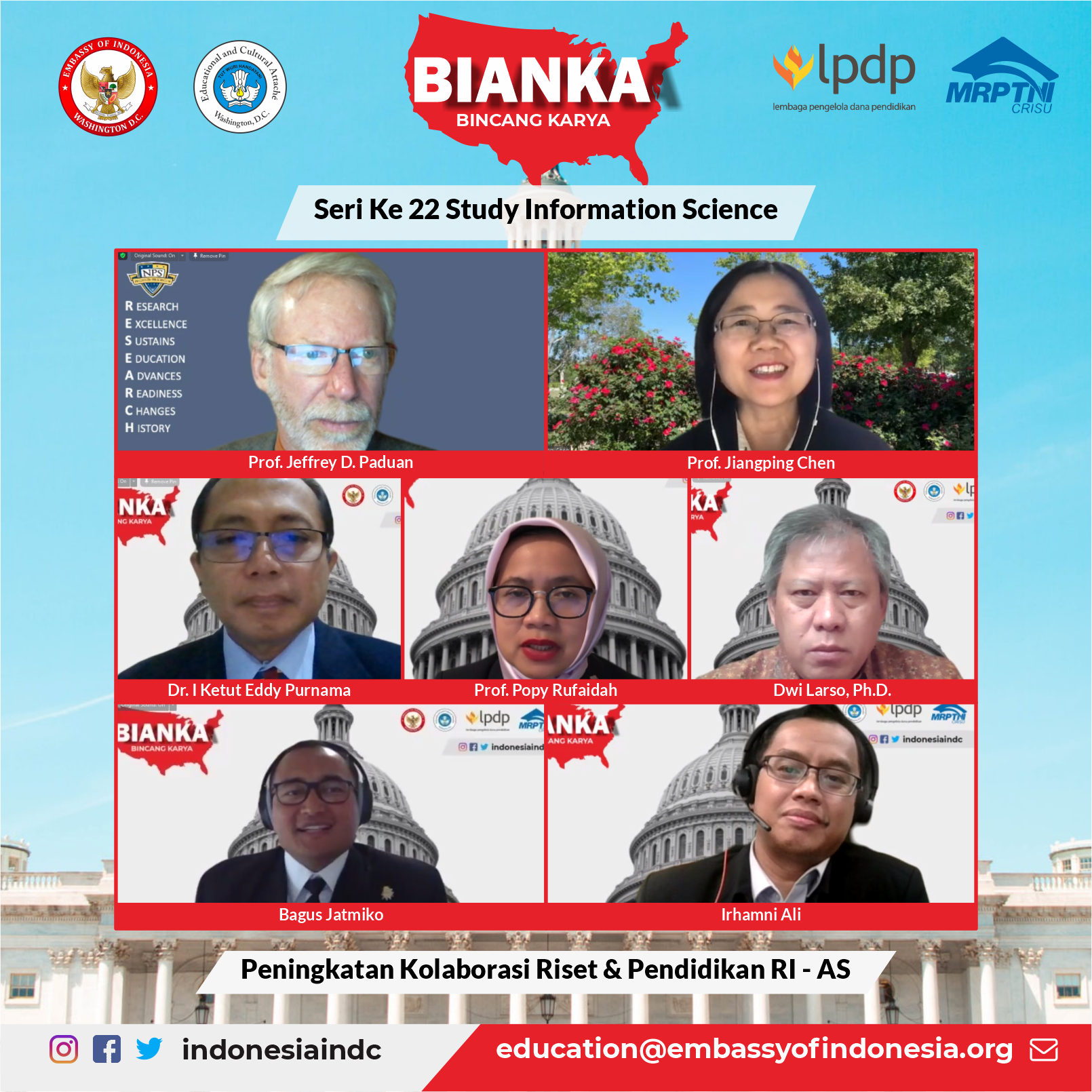 Indonesian Embassy in Washington D.C. and LPDP Agree to Support Indonesian Young Generation to Study in the US to Improve Human Resources in Information Science

Washington, D.C. (12/07/2021) – It is undeniable, in this era of the 4.0 industrial revolution, the development of information and technology (IT) is running so rapidly. Each country catches up with each other so as not to be left behind. Likewise, the Indonesian government is aware of the need to develop the IT sector.

By collaborating with the LPDP of the Ministry of Finance of the Republic of Indonesia, the Council of Rector of Indonesia State Universities (MRPTNI), and the Ministry of Education, Culture, Research, and Technology (Kemdikbudristek), Atdikbud Popy hoped that this weekly webinar could be a forum for exchange of information and foster cooperation between Indonesian universities and leading universities in the United States.

“I hope that this webinar can open the communication and cooperation between Indonesia and the United States in the fields of education and research, especially with the Naval Postgraduate School and the University of North Texas,” hoped Atdikbud Popy in her opening speech.

The event, which was led by I Ketut Eddy Purnama, Dean of the Faculty of Electrical Technology and Intelligent Information Technology, Sepuluh Nopember Institute of Technology (ITS), was also attended by the Director of LPDP Scholarship, Dwi Larso. Dwi, who is also a graduate of one of the universities in America, understood well that Indonesia needed to improve its IT human resources so that it would not lag behind other countries.

“In this era of the 4.0 industrial revolution, we are aware that everything depends on IT. Therefore, LPDP will continue to provide support in this field,” said Dwi.

Dwi hoped that in the future Indonesia could catch up with the economic growth of developed countries, starting with having qualified human resources in the field of Information Science.

This webinar activity is also a form of support for the Merdeka Belajar – Kampus Merdeka program promoted by Kemdikbudristek which aims to create an excellent and resilient Indonesian young generation.

Jeffrey D. Paduan, Dean of Research, came on behalf of the Naval PostGraduate School. Jeffrey said that the school focused on master’s and doctoral study programs. This is what makes Naval Postgraduate School a little different from other universities. In addition, the campus is also only reserved for members of the military who do not only come from the US but also from all partner countries around the world.

Registration is done only through official government channels. Therefore, only those who have received a recommendation from their institution can register. This opportunity is open not only to members of the military but also to civil servants associated with government ministries or agencies.

Regarding research collaboration, Jeffrey admitted that the opportunity was wide open considering that several of his colleagues had worked in Indonesia and he was ready if asked to make a connection.

The first presenter was Bagus Jatmiko, a member of the Navy with the rank of Lieutenant Colonel who is an LPDP awardee in a doctoral study program at the Naval Postgraduate School located in Monterey, California.

Lt. Col. Bagus explained what he was studying at NPS. He said if the development of the military world was currently moving from hybrid warfare to hyper warfare which was a combination of artificial intelligence and military systems or unmanned defense systems where the possibility of conflict will occur very quickly.

The Indonesian Air Force member said that the use of information science or intelligence was very much needed in the world of Combat Mandala, especially in the maritime sector where there was often a trade in illegal drugs, illegal fishing and border conflicts. For this reason, concerted efforts were very much needed in responding to this.

“Integration between Indonesian maritime agencies and stakeholders needs to be improved so that they can exchange information to increase awareness in dealing with threats in the maritime sector,” said Bagus.

He added that currently the NPS was carrying out Multi-Institutional All Domain command control for UxS (Unmanned Systems) where the operational applications can be carried out or implemented for the maritime sector such as monitoring illegal, unreported, and unregulated fishing which was very rampant in Indonesia.

To end his presentation, Bagus emphasized that Indonesia needed more defense scientists and collaboration between NPS and Indonesia was highly expected and academically it could be accepted and followed up by Indonesia.

Meanwhile, the second representative came from the University of North Texas, Jianping Chen, Professor and Chair, Department of Information Science. Chen shared information about the increasing number of international student admissions. He also explained the interesting programs offered by the campus. It was also stated that NUT provided various scholarships that could be given to its students.

Chen said that one of the requirements for graduating students was the obligation to publish their research articles in well-known journals and conferences considering that they placed great emphasis on this publication.

On this occasion, Chen said that research collaboration could certainly be realized and the faculties and departments would be happy to facilitate. Cooperation could also be in the form of student exchanges or mutual visits between faculties from Indonesia to NUT and vice versa.

“Universities and/or departments will only act as facilitators, which we will certainly facilitate and provide the support we can for research collaborations,” he said.

Also present were Irhamni Ali, a librarian of the National Library of Indonesia who is continuing his doctoral studies at NUT. Irhamni explained his research related to how information science in the government sector was specifically related to data science and how the data could be used by the government in making public policies.

This Fulbright scholarship awardee said that information science played a very important role in the government sector, one of which was government informatics.

“This is an applied science that combines government science with informatics or information science. So, how it integrates the data that the government has from the source of the data, collect, organize, store, recover, interpret and transmit it for the public interest,” explained Irhamni.

According to him, the emergence of the end for Civil Servant (ASN) issue, which was launched by the President of the Republic of Indonesia recently, needed to be accompanied by the readiness of adequate infrastructure and human resources. Data scientists, AI designers, and data engineers were professions that would be in great demand in the future.

“In the future, Indonesian Civil Servants must be able to have a mindset of decomposition, pattern recognition, algorithm design, and abstraction. This is called computational thinking ability,” he added.

This webinar succeeded in attracting the interest of more than 100 participants consisting of students, professionals, and government and non-government employees.

For information, the recording of Bianka’s live broadcast Series-22 can be accessed on the official Facebook page of Atdikbud USA with the link https://bit.ly/fb-watch-bianka22