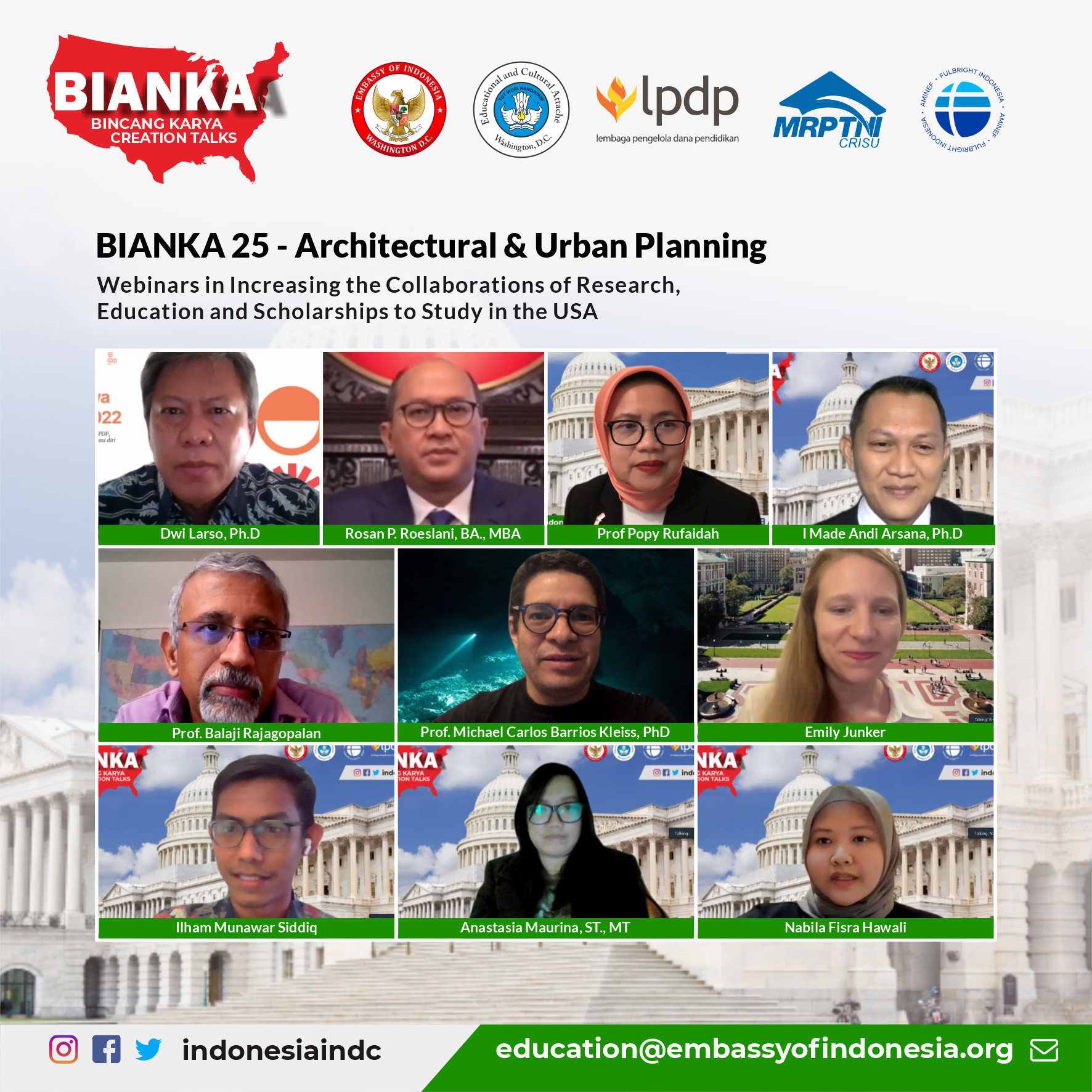 Washington, DC, (03/08/2022) — Bincang Karya (Bianka) or Creation Talks Webinar was held by the Embassy of the Republic of Indonesia (KBRI) in Washington, DC through the Educational and Cultural Attaché (Atdikbud) last Tuesday (03/08).

This series of webinars talked about the latest research in the field of architecture and urban planning by inviting three representatives of American universities and Indonesian students who are studying in those three universities. It was hoped that this webinar could open up opportunities for cooperation in both education and research collaborations between universities in Indonesia and in the US.

Attended by more than 200 participants, the event was also joined by the Indonesian Ambassador to the United States, Rosan P. Roeslani. Ambassador Rosan highlighted the important role played by human resources in the field of Urban Planning and Architecture, especially as the driving force in the revitalization process that supports sustainable development.

Dwi Larso, Director of Scholarship, Indonesia Endowment Funds for Education (LPDP) who was also present that night stated that urban planning was a forward-thinking process in which cities and urban areas were built up based on a set of goals defined by the nation.

Among the invited guests was Balaji Rajagopalan who is Chair of Civil, Environmental, and Architectural Engineering, University of Colorado Boulder. Balaji stated that the architectural study program is one of the oldest programs and has produced many excellent alumni. Balaji also said that currently, the research that they were doing is aimed at energy efficiency, the issue on which developing countries are focusing, especially in building their infrastructure.

Ilham Munawar, a Ph.D. student at the School of Civil, Environmental, and Architectural Engineering, University of Colorado Boulder, took this opportunity to share the research he was currently working on.

Ilham was completing his research entitled “Re-evaluating Disaster Evacuation Policies in Banda Aceh, Indonesia.” He explained that the active involvement of policymakers, as well as the empowerment of local community knowledge and choices in planning disaster evacuation routes and destinations, were important.

This doctoral candidate tried to investigate what evacuation routes were the local people’s choices in Banda Aceh, Indonesia, and compared these options with existing official evacuation routes or signs. Furthermore, he also explored whether there were differences between the two signs and paths.

There was also Michael Carlos B. Kleiss, Program Director of Planning, Design and Built Environment (PDBE), Clemson University who was also present to provide a comprehensive explanation of the PDBE program whose main goal is to prepare professionals and academics to face complex and diverse challenges in the world.

Michael came with Nabilla Fisra Hawali, an LPDP awardee who is currently completing her Master of Science in Urban Planning at Columbia University. In her presentation, Nabila explained that she was developing research related to the topic of Built Environment Disruption specifically on how is the cost-benefit resulting from cooperation between the city (government) and the private sector (technology companies) in the form of policy implementation (urban Tec policy).

Nabila believed that planning in the era of disruption needed to bridge two interests: planning design and development with the business, technology, and innovation by taking into account the rules of engagement. She also added that the government needed to create opportunities to balance the needs of development, innovations, technology, and business with the goals of building a city together.

On the other hand, Bamboo, which grows a lot in Indonesia, seemed to have inspired Anastasia Maurina who is currently completing her doctoral study at the School of Architecture, Arts, and Humanities, Clemson University.

Through a presentation entitled Modular Deployable Bamboo Structure, she presented her research focusing on Modular Bamboo Structures (opened and closed structures) where she proposed, tested, and evaluated these structures as one of the technologies for the vulnerable communities in developing countries. She believed that combining bamboo with opened and closed structural technology and investigating its potential use became interesting to research.

Participating also in this webinar was Emily Junker, Assistant Director of the Urban Planning program at the Graduate School of Architecture, Planning, and Preservation, Columbia University. Located in New York is a distinct advantage for Columbia University where they have lecturers from practitioners such as those who work at the Bloomberg Associates Centre for Urban Disaster Risk Reduction and Resilience, the InterAmerican Development Bank, and so on.

Atdikbud Popy Rufaidah hoped this webinar would open opportunities for communication and networking for the young Human Resources in Indonesia.

For information, the recording of the live broadcast of the Bincang Karya (BIANKA) Series-25 webinar can be accessed on the official Atdikbud USA Facebook page with the link https://bit.ly/fb-watch-bianka25