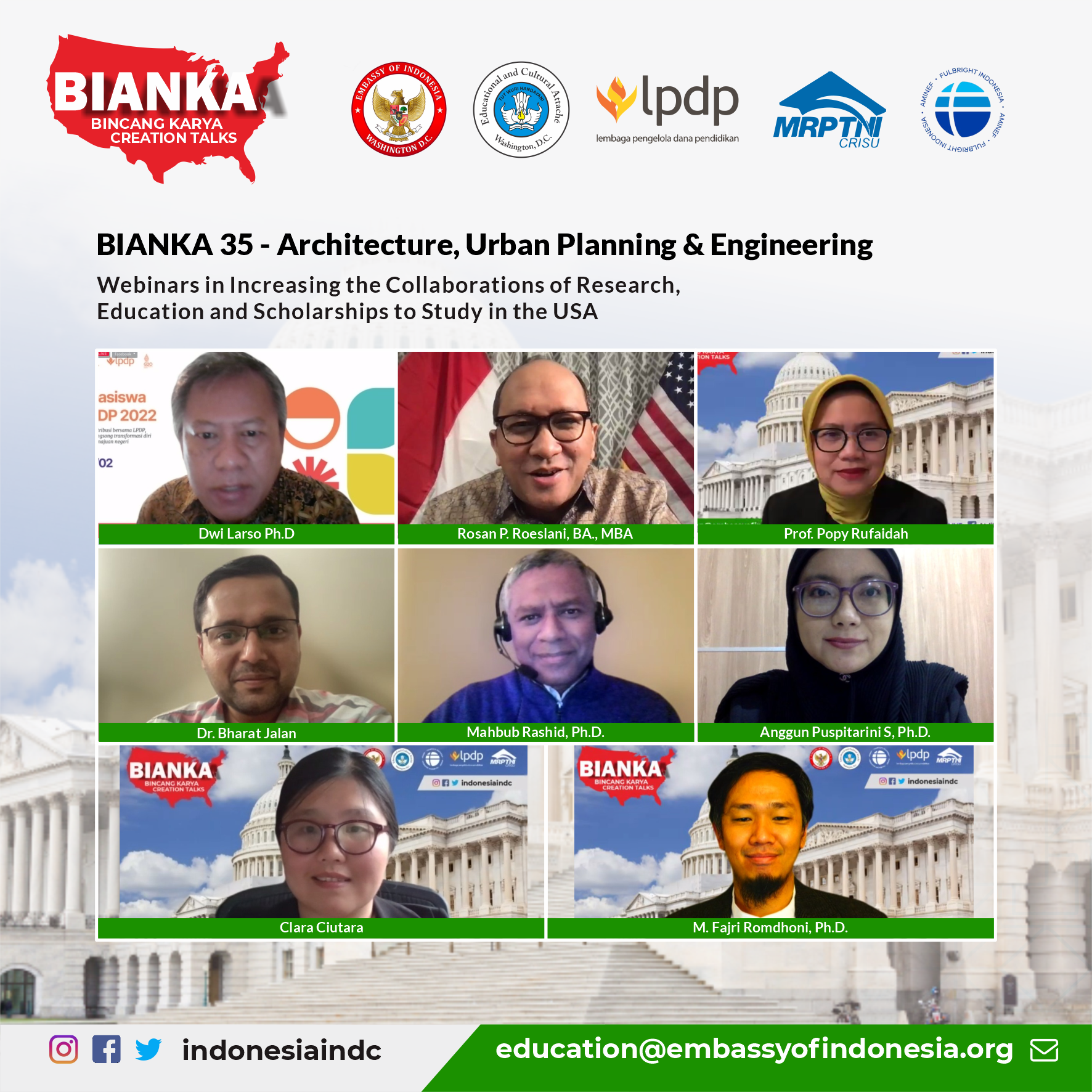 Supporting the Achievement of Indonesia’s SDGs in the Urban Planning Sector, the Indonesian Embassy in Washington DC Opens Opportunities for Research Cooperation between Indonesia and the US.

Bincang Karya (Bianka) was again held by the Embassy of the Republic of Indonesia (KBRI) in Washington D.C. through the Office of Educational and Cultural Attaché (Atdikbud) with the theme of Architecture, Urban Planning, and Engineering.

“There are several targets in achieving Indonesia’s SDGs, one of which is by designing infrastructure that can synergize and support all regions of Indonesia,” said the Ambassador of the Republic of Indonesia to the United States Rosan Roeslani (24/05).

Ambassador Rosan said that currently the urban planning development in Indonesia has been in line with the principles of the Indonesia’s SDGs specifically point 11, namely creating cities and settlements that are inclusive, safe, resilient, and sustainable.

Atdikbud Popy Rufaidah said that because of their importance, these issues were chosen as the theme of the 35th Bianka to open the possibility of education and research collaboration between experts in the United States and in Indonesia.

“In addition, it is also hoped that more Indonesian human resources will continue their studies in the United States, especially with Indonesian government scholarships, such as LPDP,” added Atdikbud Popy.

Dwi Larso, Director of Scholarships of the Indonesia Endowment Funds for Education (LPDP), who was also present that night, said that LPDP and the government were currently not only focusing on urban planning but also engineering.

Dwi explained, “In the future there will be more and more engineering and science areas that will be supported, especially not only to create and produce masters and Doctors themselves, but also to support the real sector of Indonesia. Because a big country like Indonesia needs more big and strong industries to prosper Indonesia in the future.”

The event, that was led by Anggun Puspitarini Siswanto, Head of the International Office of Universitas Diponegoro, presented M. Fajri Romdhoni who had just finished his doctoral program at the School of Architecture & Design, the University of Kansas. Fajri presented his research related to Urban Geometry and the Configuration of Provincial Capitals in Indonesia.

Fajri said, “The aim of the research is to study the diversity and uniqueness of the form and pattern of Indonesian cities based on their regional groups. This diversity of cities can help explain the configuration and structure of the city and provide an understanding and visualization of urban development.”

Fajri was accompanied by Dean School of Architecture & Design, The University of Kansas, Mahbub Rashid. Mahbub briefly discussed the project being carried out in his department called Studio 804.

In addition, there was also Clara Ciutara, a doctoral candidate in Materials Science from the University of Minnesota. Clara stated that she was researching surfactants, namely surface-active materials or materials that are active on the surface like soap or detergent.

“I investigate how surfactants can affect surface elasticity and this can help us to make products with the properties we want by fine-tuning the type and concentration of the surfactant,” said Clara.

Bianka webinar is a collaborative event between Indonesian Embassy in Washington D.C., The Indonesia Endowment Funds for Education (LPDP), and Council of rectors of Indonesian State University (MRPTNI).

The recording of the live broadcast of the 35th of Bincang Karya (BIANKA) webinar in the fields of Architecture, Urban Planning and Engineering can be accessed on the official Atdikbud USA Facebook page with the link https://bit.ly/fb-watch-bianka35.