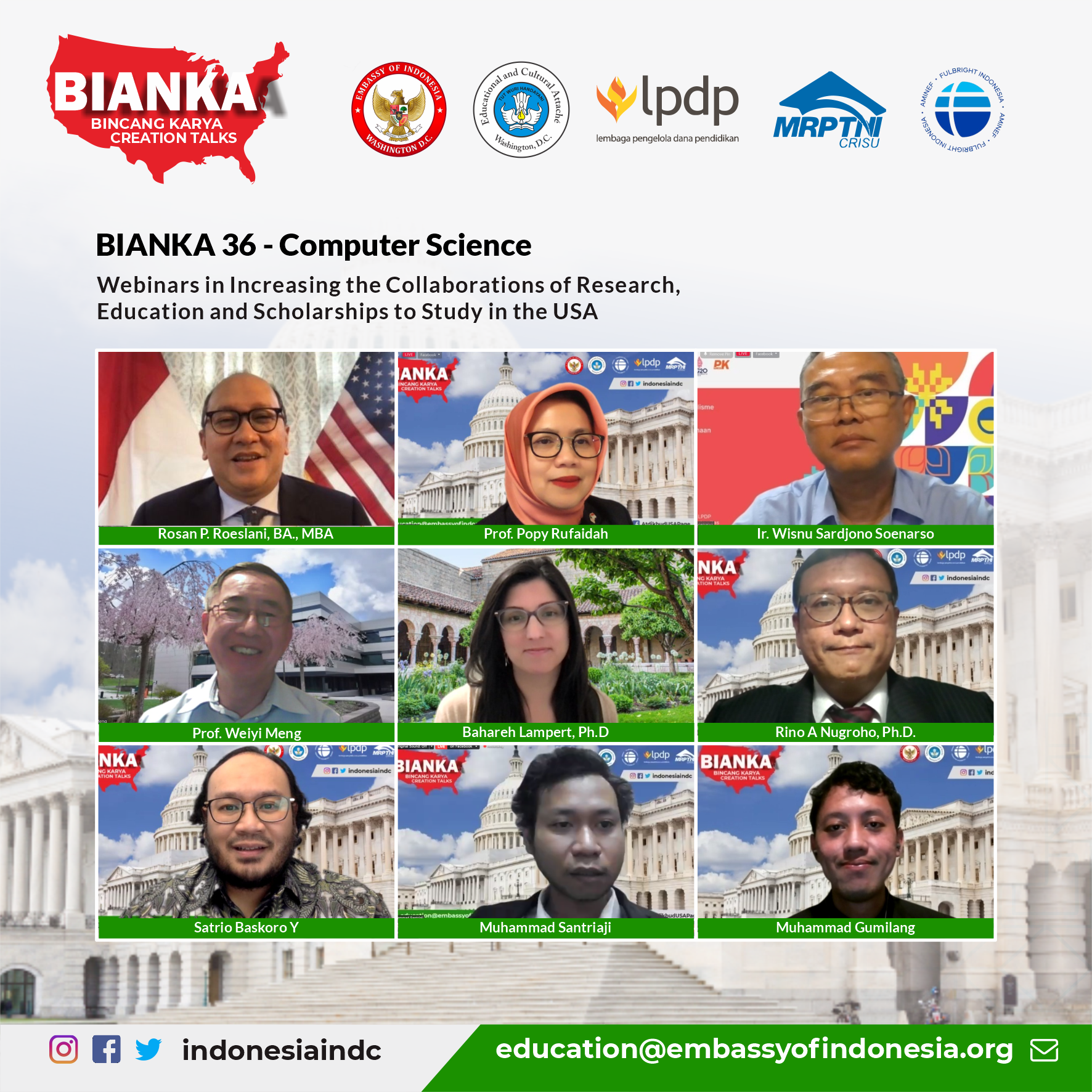 Washington, D.C. (05/31) —- Computer Science was chosen as the theme for the 36th series of Bincang Karya (Bianka) which was held last Tuesday night. On this occasion, the Ambassador of the Republic of Indonesia in Washington, D.C., Rosan Roeslani said, “Science, technology, and innovation are important components to increase competitiveness in facing the swift flow of global competition and also bring Indonesia out of Middle-Income Traps.”

Ambassador Rosan also said that the use of technology is not only in the industrial sector but also in the economic sector and even in the application of E-Government.

The Educational and Cultural Attaché (Atdikbud) of the Indonesian Embassy in Washington, D.C., Popy Rufaidah said that the purpose of this webinar was to open up opportunities for cooperation in the field of Computer Science between Indonesian researchers and professionals and researchers or institutions in the United States.

“It is hoped that the number of Indonesian students who continue their studies in the USA will also increase along with various scholarship opportunities, either from the universities or through scholarships provided by the government such as LPDP,” explained Atdikbud Popy.

Also attending the event, Wisnu S. Soenarso, the Director of Research of the Indonesia Endowment Funds for Education (LPDP) also underlined the important role of computer science experts in today’s modern era. Among them, according to Wisnu, was their role in digital business (e-commerce) which is indeed spreading in Indonesia.

The event, which was chaired by Rhino A. Nugroho, Head of the International Office of Universitas Sebelas Maret (UNS) discussed the latest research done by Indonesian students who are currently completing studies at three universities in the United States.

Satrio said that his research was useful for Indonesia, especially to understand the development of Indonesian people’s behavior, especially on social media platforms regarding issues that caused polarization of opinion.

In addition, a collaborative project was explained by Muhammad Gumilang, a candidate for a Master of Computer Science from Cornell University. “The project entitled Semantic Legal System was carried out with the aim of providing precise definitions of ambiguous words on the state regulation webpage,” explained Gumilang.

Gumilang explained that in this project, he had to make the most appropriate words come up according to the text on the webpage. He also said that he collaborated with the Law School at Cornel University namely the Legal Information Institute.

Meanwhile, Muhammad Santriaji, a doctoral candidate in Computer Science at the University of Chicago, presented his research which aimed at providing adaptability to computers or computer systems including applications and hardware on the computer.

“Adaptation here means the ability to reconfigure to adapt to the environment. For example, in the cloud system, he created a cloud system to adapt by using resources based on the number of users who use the system to deal with problems that arise,” said Aji.

Meanwhile, Bahareh Lampert, Dean of Students, Physical Science Department, University of Chicago, Chicago, Illinois gave an explanation of the various programs that the institution offers. Lampert also said that the Astronomy and Astrophysics and Geophysical Sciences field at his institution is collaborating with FermiLab and other institutions to carry out several areas of research, such as The Universe beyond our Milky Way galaxy, The Extreme universe, and so on. while the research areas in the doctoral program in Physics include Accelerator Physics, Astrophysics, and others.

Bincang Karya (Bianka) is a webinar series held in collaboration with the Indonesian Embassy in Washington, DC through the Educational and Cultural Attaché Office, Indonesia Endowment Funds for Education (LPDP), and the Council of Rectors of the Indonesian State University (MRPTNI).

The recording of the live broadcast of the 36th of Bincang Karya (BIANKA) webinar in the field of Computer Science can be accessed on the official Atdikbud USA Facebook page with the link https://bit.ly/fb-watch-bianka36