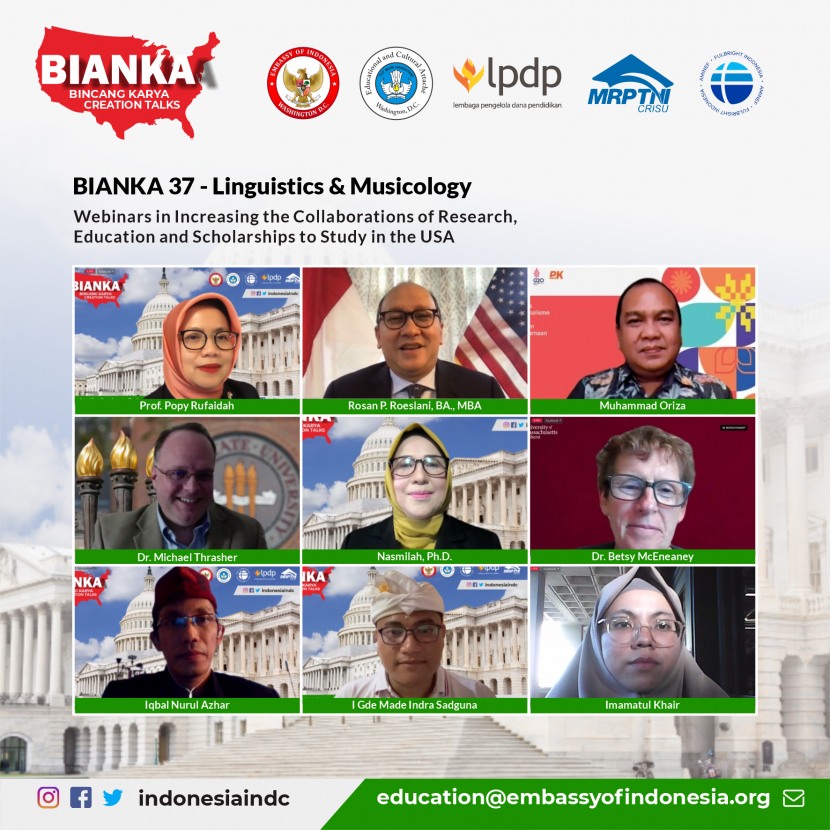 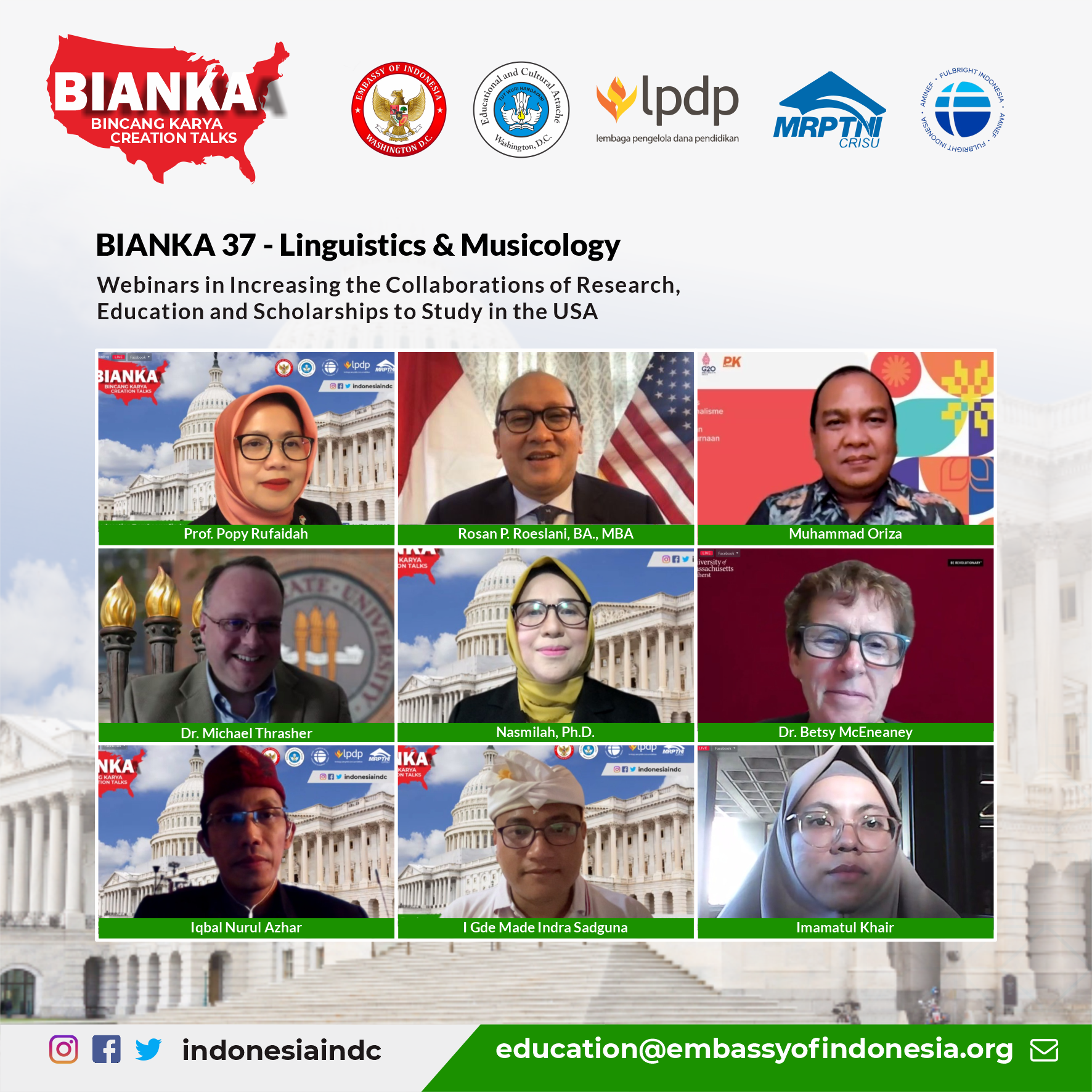 Bilingual Education, Madurese Language, and Balinese Gamelan Get the Attention of Master and Doctoral Candidates in Linguistics and Musicology from Indonesia in the United States

Washington, D.C. (06/07) — Bincang Karya (Bianka), a collaborative webinar between the Embassy of the Republic of Indonesia (KBRI) in Washington, D.C. through the Office of the Educational and Cultural Attaché (Atdikbud) Washington, D.C. and the Indonesia Endowment Funds for Education (LPDP) as well as the Council of Rectors of the Indonesian State Universities (MRPTNI) was held last Tuesday and mainly discussed some issues and research on Linguistics and Musicology.

The Ambassador of the Republic of Indonesia to the United States, Rosan P. Roeslani said that Indonesia has a variety of languages ​​and traditional music that should be preserved. “There are 718 languages ​​spread throughout Indonesia according to data from the Agency for Language Development and Cultivation, Ministry of Education, Culture, Research, and Technology,” said Ambassador Rosan.

The linguists and musicologists are expected to be able to help Indonesia preserve the nation’s culture by playing an active role in the teaching, preserving, researching, and developing that culture including its languages and traditional music.

Meanwhile, the Educational and Cultural Attaché, Popy Rufaidah, said that Bianka webinar was held with the aim of increasing the number of Indonesian students, researchers, and professionals who continued their studies in the United States with scholarships provided by the government, one of which was the LPDP.

“We hope that after this event, collaboration in the field of Linguistics and Musicology can be established between researchers and students in Indonesia with researchers at the invited universities,” added Atdikbud Popy Rufaidah.

Mohammad Oriza, the Director of Investment of LPDP said that LPDP will continue to support Indonesian young human resources in the fields of Linguistics and Musicology. “I’m happy to inform you that there are more than 700 awardees, they took Linguistic program, whereby for Musicology program, there are 23 awardees that took that subject,” explained Oriza.

The event was joined by more than 100 participants and invited Nasmillah, the Head of the English Department of Universitas Hasanudin as the moderator.

On this occasion, a doctoral candidate in Linguistics from Arizona State University, Iqbal Nurul Azhar, explained his research which focuses on language planning, especially orthographic planning. Iqbal said, “I will be more specific to the Madurese language because the condition is less stable nowadays. It has many speakers but the spelling is still not consistent because there is a competition between two spelling versions which causes people to be confused about which one to choose,” said Iqbal.

Meanwhile, Imamatul Khair, a Master’s candidate in Bilingual, ESL, and Multicultural Education from the University of Massachusetts, Amherst, discussed a comparison between bilingual/multilingual education in the United States and in Indonesia. Ima said, “One example of the strategies in bilingual education is that subject teacher can integrate language learning at one time or what we call content-based language learning.”

Unlike the previous presenters, a doctoral candidate in Musicology from Florida State University, I Gde Made Indra Sadguna explained that his research focuses on analyzing the concept of improvisation in Kendang (a traditional double-headed barrel drum) in Gong Kebyar Gamelan, Bali. “I provide a deep understanding of improvised playing techniques in Balinese Kendang which so far have not received detailed attention and analysis. The findings of my study redefine the importance of improvisation in Balinese Gamelan,” explained Indra.

Also present at the event, Michael Thrasher, Associate Dean for Academic Affairs & Director of Graduate Studies College, Florida State University. Thrasher said that the institution provided various supports for international students. “We have the Center for Global Engagement, which is designed to help international students acclimate to the culture in the United States, provide support for theses, and so on to help them find a place here,” said Thrasher.

Betsy McEneaney, Department Chair of Teacher Education and Curriculum Studies College of Education from the University of Massachusetts, Amherst also joined the event. “Professor Ivon Arroyo is in the Mathematics, Science and Learning Technology Group, Professor Ysaaca Axelrod works with early childhood settings. And she really focuses on bilingual children and non-bilingual children, and how their bilingual language shapes their identities, and Maria Luisa de Stefano, she has really focused on bilingual education and a lot of different areas,” explained McEneaney when introducing her faculty members and their research areas.

The recording of the live broadcast of the 37th of Bincang Karya (BIANKA) webinar in the field of Linguistics and Musicology can be accessed on the official Atdikbud USA Facebook page with the link https://bit.ly/fb-watch-bianka37.