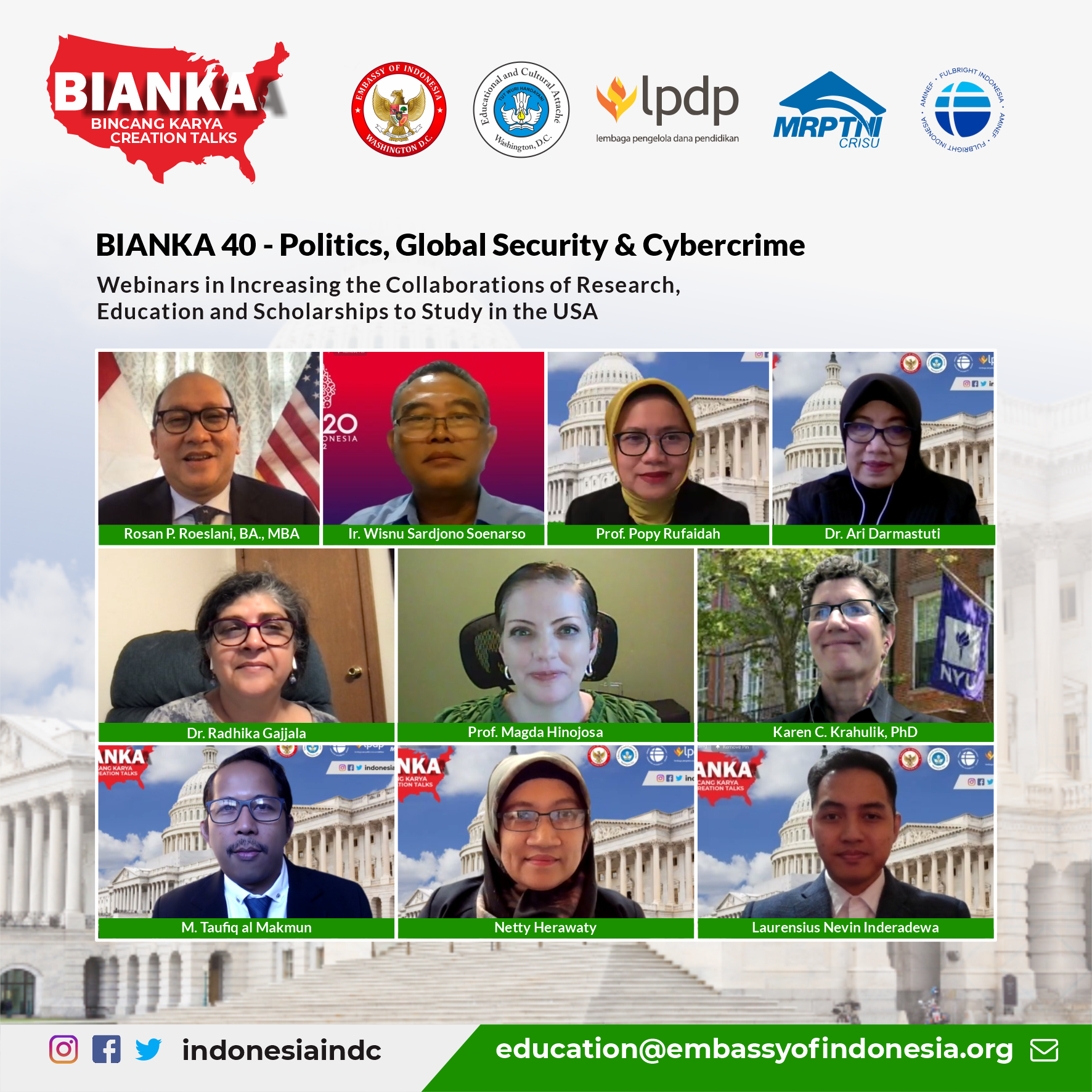 Currently, the increasing use of the internet causes the flow of information in cyberspace to be unavoidable. The internet has become a medium for exchanging all kinds of information, including political and cultural issues. In the 40th series of Bincang Karya (Bianka) with the theme of Politics, Global Security, and Cyber ​​Crime, Ambassador Rosan Roeslani said, “The current digital era makes internet users increase. The internet, especially the social media, is becoming a new public platform that influences political developments in Indonesia.”

According to Ambassador Rosan, the use of social media can increase people’s political awareness, thereby increasing their participation in politics. However, the increase in the number of internet users brings its own consequences, namely the increasing threat of cyberspace.

“Indonesia needs to improve its cyber security system. It is hoped that in the future there will be more experts in cybersecurity to anticipate these threats,” said Ambassador Rosan when ending his remarks last Tuesday night.

Meanwhile, the Director of Research of the Indonesia Endowment Funds for Education (LPDP), Wisnu Sardjono, said, “Indonesia needs more studies and talents in the fields of Political Science and Global Security to prevent global crimes that are increasingly rampant.”

Bincang Karya (Bianka) is a forum initiated by the Indonesian Embassy in Washington, DC through the Educational and Cultural Attaché in Washington, DC to increase the number of Indonesian students who continue their studies in the US, particularly in the fields of communication, politics, and cyber security. This was stated by Popy Rufaidah as the Educational and Cultural Attaché in Washington, DC. In addition, Popy also hoped, “Hopefully this forum can open the way for collaboration between Indonesia and the United States in the field of education and research.”

This event invited Muhammad Taufiq al Makmun, a doctoral student in American Cultural Studies at Bowling Green State University to present his dissertation research entitled Globalized Solo: The Changing Landscape of an Indonesian City where Taufiq examines how cultural developments affect the spatial or landscape development of a city, including the city of Solo. “For the City of Solo, this study can be used as a reflective material for city growth and a source of information for future development planning for the city of Solo,” said Taufiq.

Netty Herawaty, a doctoral student at the School of Politics and Global Studies, Arizona State University, was also invited. “My dissertation examines the reasons for the existence of political dynasties in the legislative institutions in Indonesia through an institutional approach, empirically testing the relationship between kinship relations or political dynasties and the election of candidates in parliament, and the consequences for women’s representation in Indonesia,” said Netty. Netty hoped that one of the significances of her research is to contribute to the collection of kinship data in Indonesia, which has not been comprehensive yet.

Meanwhile, Laurensius Nevin Inderadewa, who is a member of the Indonesian National Police, is currently studying for a Master of Science in Global Security, Conflict, and Cybercrime, at the School of Professional Studies, New York University (NYU). Not only sharing his academic journey, but Nevin also revealed the reasons for choosing the USA to continue his study. “First, the USA is a superpower country that becomes the center of technological development in the world. Second, the USA has a comprehensive law enforcement system, both in terms of tools, workflow, research, and also the division of tasks that makes the United States has the best law enforcement system in the world,” said Nevin.

Representatives of the universities where the three students continue their studies were also specially invited. Randhika Gajjala, Professor of School of Media & Communication and of the American Culture Studies Program, Bowling Green State University (BGSU) provided an overview of the MA and Ph.D. programs in American Culture Studies at her institution. Gajjala also mentioned various funding in her presentation.

Meanwhile, Magda Hinojosa, Director of School of Politics and Global Studies, Arizona State University, in her presentation, said that even though the faculty is relatively small, this is actually an advantage because they can give maximum attention to each student. They even know in detail the names of students and what they are doing.

The event, which was led by Ari Darmastuti, Head of the International Relations Department, was a collaboration between the Indonesian Embassy in Washington, DC and the Indonesia Endowment Funds for Education (LPDP), and the Council of Rectors of Indonesian State Universities (MRPTNI). Watch the recording of the live broadcast of the 40th Series of Bincang Karya (BIANKA) in the fields of Politics, Global Security, and Cyber ​​Crime on the official Facebook page of Atdikbud USA with the link https://bit.ly/fb-watch-bianka40