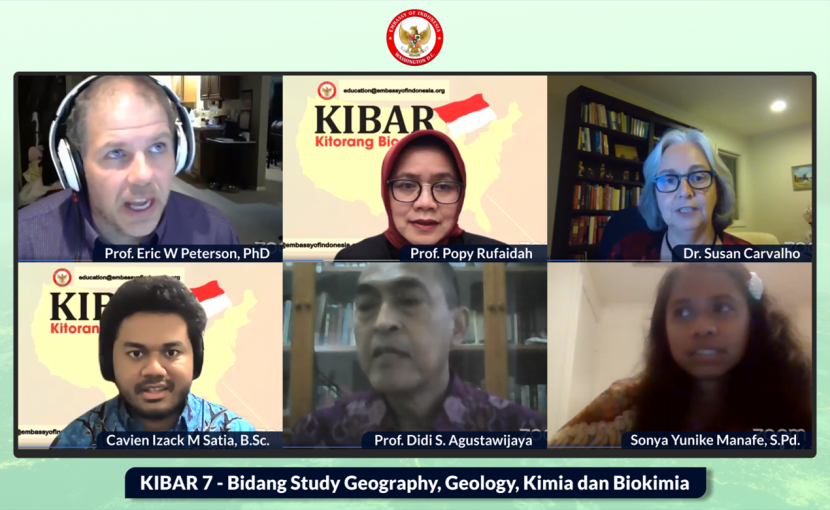 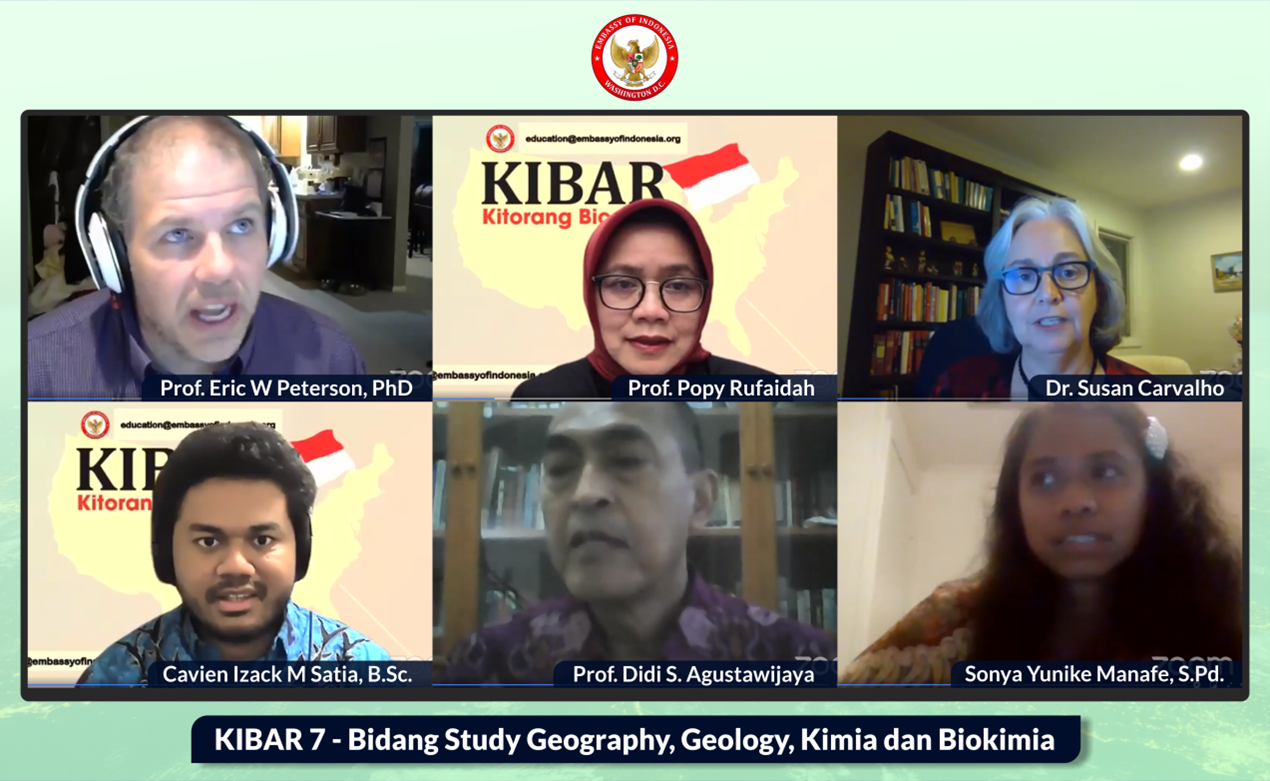 Washington, DC., (10/22/2020). The 7th series of KIBAR (Kitorang Bicara) invited some speakers to have presentations under the theme of Geography, Geology, Chemistry and Biochemistry study programs. The webinar was chaired by Prof. Popy Rufaidah, the Education and Cultural Attaché.

KIBAR (Kitorang Bicara) or “We talk” is a serial-webinar held by the Indonesian Embassy in Washington D.C., USA through the Attaché for Education and Culture.

The recorded live event of KIBAR Seri-7 can be accessed in the following link http://bit.ly/fb-watch-kibar7

The second speaker was Dr. Susan Carvalho, Associate Provost and Dean of Graduate School, the University of Alabama. In her presentation, Dr. Carvalho gave a brief introduction about The University of Alabama (UA) including their location, why choosing UA, their research institutes, admission requirements, students’ financial support and some other aspects.

Meanwhile, Cavien Izack Marcelyno Satia, Hydrogeology M.Sc., Student – Illinois State University, also became one of the speakers. In his presentation, Cavien explained about the department that he chose and shared his research to the audience. His proposed research topic is the Impact of Mine Trailing’s to the Water Quality and the Deforestation of Mangroves in the Ajkwa River estuary in Timika, Papua. By using machine learning approach, he expected that the machine learning could identify the deforestation happened in research site so that the best method to solve this could be found. Although some there were some challenges for this research, in the future, with Hydrogeology, he hoped the groundwater contamination could be prevented.

On the other hand, Sonya Yunike Manafe, MS Student at Chemistry and Biochemistry Department, The University of Alabama presented her research about Artificial Photosynthesis. In artificial photosynthesis, she tried to duplicate the process of Photosynthesis by reducing the carbon dioxide by using the sun light which results not only the Carbohydrate and oxygen but also some other beneficial chemical product such as Carbon monoxide (CO). In the University of Alabama, she was involved in a research group called Papish Group. in the lab, they are having a project which topic is Carbon Dioxide Reduction with funding from National Science Foundation. Meanwhile, she is now doing a project about synthesizing or producing new catalyst by using Nickel, a metal that can reduce the carbon dioxide and change it to carbon monoxide and other metal compounds.

The last speaker was Prof. Didi Agustawijaya, Faculty of Geological Engineering, University of Mataram, Lombok, West Nusa Tenggara. He made certain points especially in relation to the study conducted by Cavien and Sonya. In addition, he added one in developmental geology. He talked about the earthquakes which frequently happened in Indonesia.  Prof. Agustawijaya also talked about the Neogene magmatic arches of Indonesia such as gold and associate minerals. Moreover, he explained in brief about gold in Nusa Tenggara region, Volcano interior and resources, Nickel in Indonesia, Mineralization of Lithium, Li, Ni, and Co in the World, and Rare Earth eleemnts (REE). Some cases in Indonesia such as what happened in Sidoarjo, East Java, the mud Volcano. At the end of his presentation, Prof. Agustawijaya also discussed some earthquakes that happened in several locations in Indonesia such as in Nusa Tenggara (1922-2018), Lombok (1979), and Lombok (July-August 2018).